"The Land of the Fine Triremes:" Naval Identity and Polis Imaginary in 5th Century Athens 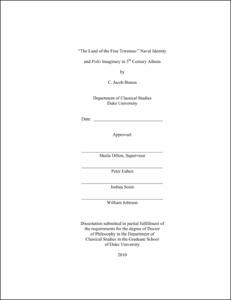 This dissertation focuses on the artistic, archaeological, and literary representation and commemoration of the Classical Athenian navy. While the project stresses the various and often contradictory ways in which the Athenians perceived and represented their navy, its larger purpose is to argue that the integration of multiple and various media has the potential to change long-standing interpretations of ancient societies and cultures. Relying on the literary evidence of the "Old-Oligarch" and Plato, scholars have traditionally held that the 5th-century Athenian navy and its rowers were viewed by their contemporaries as a "mob" and a locus for citizen "riff-raff." Yet careful consideration of the vases, monuments, and buildings of 5th-century Athens, as well as the literary output of the period, demonstrate that the navy held a far more complex, and at times even positive, position in Athenian society.