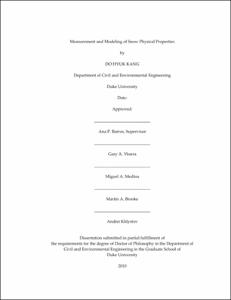 The overall objective of this thesis is to characterize the space-time variability of snowpack physical properties at high spatial and temporal resolution for downscaling of remote-sensing products of snow cover, snow depth and snow water equivalent. The hypothesis is that the temporal evolution of the sub grid-scale statistical structure of relative permittivity fields and other snow properties can be related to the temporal evolution of the areal averages obtained from remote-sensing, thus enabling downscaling of snow water equivalent and snow depth even in the absence of ground-based measurements. For this purpose, research was conducted on ground-based measurements of subgrid-scale properties, and on the development and evaluation of a microwave simulation system consisting of coupled snow hydrology and radiative transfer models.

First, an L-band TX-RX wireless sensor to monitor snow accumulation and snow wetness was designed, fabricated, and tested under laboratory conditions. The sensor was designed to operate at 39 discrete frequencies (39 channels) in the 1.00-1.76-GHz frequency range (0.02-GHz increments). Full-system testing of the first-generation system was conducted using commercial attenuators up to 20.0 dB to test the prototypes against design specifications. It was determined that performance was nearly optimal in the 1-1.2-GHz range. Next, snow layers of varying snow wetness were physically modeled under controlled laboratory conditions. This was achieved by adding varying amounts of water to a layer of fixed porosity foam inside a rectangular tank placed above the transmitter. The attenuation and relative phase shift of the RF signal propagating through the experimental "snowpack" and through the laboratory "atmosphere" were subsequently analyzed as a function of volumetric water content equivalent to snow wetness. Under the space and geometry limitations of the laboratory setup, the data show that the single-frequency measurements exhibit high sensitivity for wetness values up to 24%, whereas multifrequency retrieval is necessary for higher liquid water contents. Measurements from a field deployment during snowfall in January 2009 are also presented. The results suggest that there is potential for using the RF sensor to measure cumulative snowfall for short-duration events.

Second, a land-surface hydrology model (LSHM) [Devonec 2002] with one-layer snowpack physics was coupled to a microwave emission model (MEMLS, [Wiesmann 1999], [Matzler 1999]) including and atmospheric attenuation correction algorithm. The objective is to develop a parsimonious and autonomous framework for monitoring snow water equivalent in remote regions where ancillary data and ground-based observations for model calibration and, or data assimilation are lacking. Two case-studies were conducted to evaluate the coupled hydrology-emission model in forward mode: 1) the intercomparison of a multi-year simulation of snowpack radio-brightness behavior at Valdai, Russia, against Scanning Multi-channel Microwave Radiometer (SMMR) observations at three frequencies (18, 21, and 37 GHz, V and H polarizations) for a six year period, 1978-1983; and 2) an intercomparison against Special Sensor Microwave Imager (SSM/I) and Advanced Microwave Scanning Radiometer-EOS (AMSR-E) during February 2003 in Colorado as part of CLPX (Cold Land Processes Field Experiment). The results show that the model captures well the radiative behavior of the snowpack, especially for vertical polarization in the winter accumulation season January-March for all years of simulation and all cases. Large biases for the Valdai case study were identified for intermittent snowpack conditions at the beginning of the cold season (e.g. fall) which can be explained by uncertainty in fractional snow cover and spatial variability of skin liquid water content at the large spatial scale of SMMR products. Nevertheless, the modeling system uncertainty range remains below the known biases of SMMR products as compared to SSM/I [Derksen 2003]. Using meteorological data from NASA CLPX [Cline 2003], the simulated brightness temperatures agree well with SSM/I and AMSR-E during February, 2003. Overall, the coupled LSHM-MEMLS forward model also performs well at smaller scales and where more ancillary data are available, and its performance is consistent with that of more complex snow models. This research suggests there is therefore potential of this modeling framework model that does not require calibration for useful physically-based estimation of snow water equivalent from remote sensing observations over large areas at multiple spatial resolutions.

Third, the snow hydrology model was modified to include a multi-layer transient representation of the evolution of snowpack properties with time. The coupled multi-layer snow hydrology and emission model was implemented and tested independently for two very different climatic and physiographic regions (Valdai and CLPX2002-2003) for both wet and dry snow regimes over multiple years with good results both in terms of capturing the evolution of snowpack physical properties, and the radiometric signature consistent with SMMR, SSM/I and AMSR-E observations at 18-19, 22-23, and 36-37 GHz V and H polarizations. These applications show transferability of the modeling system, and its potential utility in large-scale retrieval over large areas with limited if any ground-based observations to constrain the model or for data-assimilation. Despite overall good skill as demonstrated by relatively low errors, one weakness was identified with respect to the simulation of the emission behavior of the snowpack, especially for horizontal polarization induced by liquid water in the snowpack, when ice layers (ice lenses) form due to freezing of liquid water either due to daytime melting, or due to rain-on-snow events. Furthermore, it was established that a more accurate estimation of snow density especially in the case of wet snow regimes would be important to improve skill for vertical polarization. Consequently, a multi-layer snow hydrology model (MLSHM) that can capture the events and snowpack gradients in water content and structure through accumulation, ripening and melting phases was developed and coupled to MEMLS. Significant differences between the simulations using the single and multilayer model formulations were found in the ripening and melting phases when wet snow regimes are more frequent. These differences result from differences in snow density, with the single-layer formulation exhibiting higher density (shallower snow depths) and faster melting rates. Whereas there are no significant changes in the microwave brightness temperatures in the vertical polarization from single to multilayer simulations, there is dramatic improvement in the results for horizontal polarization in Valdai, but not in the case of the more complex snow regimes in CLPX. Further work is required to improve parameterizations of snow density and snow structure including evolution of grain size distribution.

Overall error statistics and detailed analysis of physical behavior show that the coupled MLSHM-MEMLS is apt to be used in data-assimilation in snow retrieval.