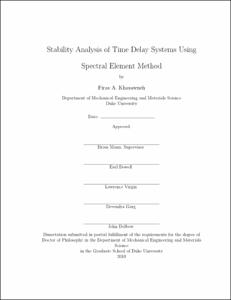 The goal of this work is to develop a practical and comprehensive methodology to study the response and the stability of various delay differential equations (DDEs). The development of these new analysis techniques is motivated by the existence of delays in the governing equations of many physical systems such as turning and milling processes.

Delay differential equations appear in many models in science in engineering either as an intrinsic component (e.g. machining dynamics) or as a modeling decision (biology related dynamics). However, the infinite dimensionality of DDEs significantly complicates the resulting analysis from both an analytical and numerical perspective. Since the delay results in an infinite dimensional state-space, it is often necessary to use an approximate procedure to study DDEs and ascertain their stability.

Several approximate techniques appeared in literature to study the stability of DDEs. However, a large number of these techniques---such as D-subdivision, Cluster Treatment of Characteristic Roots and Continuous Time Approximation---are limited to autonomous DDEs. Moreover, the methods that are suitable for non-autonomous DDEs, e.g. the Semi-discretization approach, often result in a very large system of algebraic equations that can cause computational difficulties. Collocation-type methods, such as Chebyshev-collocation approach, have also been used to study DDEs. One major limitation of the conventional Chebyshev collocation approach is that it is strictly applicable to DDEs with continuous coefficients. An alternative approach that can handle DDEs with piecewise continuous coefficients is the Temporal Finite Element Analysis (TFEA). However, TFEA has only linear rates of convergence and is limited to h-convergence schemes. The limited rate of convergence in TFEA has prohibited its application to a wide class of DDEs such as DDEs with complicated coefficients or with distributed and multiple delays.

As an application of the methods developed in this thesis, I studied the stability of turning and milling models. For example, a distributed force model was proposed to characterize cutting forces in turning. The stability of the resulting delay integro-differential equation was studied using the methods developed in this study and they were shown to agree with practical observations. As another example, the stability of a milling process--- whose model contains piecewise coefficients---was investigated. The effect of multiple-flute engagement, which contributed to the complexity of the coefficients, was also investigated. The resulting stability charts revealed new stability observations in comparison to typical analysis methods. Specifically, I was able to show that unstable regions appear in what was deemed a stable region by prior analysis techniques.