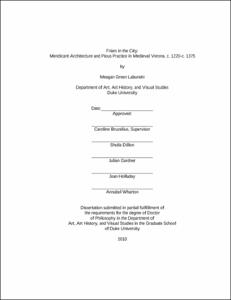 This dissertation explores how the combination of pious practice, economic activity, and religious poverty shaped the architecture of the mendicants in medieval Verona. It also examines how the presence of the friars affected the city. By the thirteenth century, the populated centers of northern Italy were fertile grounds for heretical movements, religious skepticism, and anti-clerical attitudes. The mendicant orders developed as a response to the crisis of the medieval church in the city and provided a new concept of the religious vocation, one committed to voluntary poverty and the conversion of heretics. The most important representatives of the new orders were the Franciscans and Dominicans, who centered their religious mission in an urban context where the growth of commerce and a literate and numerate middle class required a new approach to pastoral care, one that directly addressed both doctrinal and social issues. The friars revolutionized traditional religious practice: they used exterior sites as extensions of liturgical space and their innovative approach to church architecture emphasized function and utility.

Existing studies on mendicant building have traditionally emphasized the formal characteristics of the monuments, examining churches in isolation, with little concern for context, use, and sequence of construction. This dissertation moves beyond this approach to consider the broader circumstances that frame the appearance of mendicant houses. It examines how the Franciscan church of S. Fermo Maggiore, the Dominican church of S. Anastasia, and their respective communities, responded to the dynamics of urban Verona. The study includes revised construction narratives and new dates for S. Fermo and S. Anastasia that emphasize the <italics>process<italics> of construction--how the friars approached their building projects--and the role of lay patronage in the configuration of architectural space. As research reveals, the friars began to erect their conventual complexes before instigating construction or reconstruction of the churches themselves, and this sequence had significant implications for how the friars used the spaces in and around their convent for preaching and liturgical celebrations. They planned or reconfigured their architectural space to both appeal to and accommodate the lay public and their pious practices, including sermon attendance, burial, and the veneration of local saints. Modifications to the exterior spaces around the convents likewise indicate their liturgical importance. By investigating the specific interactions between the mendicants and the city of Verona, this dissertation explores how the architecture of the friars expressed aspects of the society in which they operated.