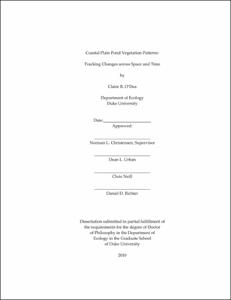 Coastal plain ponds are an understudied and threatened wetland ecosystem with many unique environmental attributes. Research in these ponds can investigate species-environment relationships, while simultaneously providing ecosystem-specific information crucial to their continued conservation and management. This dissertation explores patterns in coastal plain pond vegetation composition and species-environment relationships across space, through time, and in the seed bank and standing vegetation.

In a two-year field study at 18 coastal plain ponds across the island of Martha's Vineyard, Massachusetts, I investigated species-environment relationships within and among ponds. I identified vegetation species presences and abundances within 1 m2 quadrats, which ran continuously along transects established perpendicular to the water's edge. Species data were analyzed against local and landscape-scale environmental data. I also conducted a one-year seed bank study in which sediments from four coastal plain ponds were incubated in growth chambers and composition was compared to the standing vegetation. One hundred and thirty-four plant species were identified during vegetation sampling and 38 species were identified from incubated sediments.