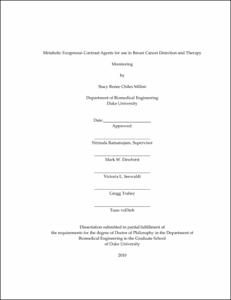 Functional imaging gives clinicians the ability to monitor breast cancer progression and response to therapy. Modern techniques such as Positron Emission Tomography (PET) has allowed for clinicians to visualize the metabolic need of breast cancer and track it longitudinally. However, these techniques are expensive, technologically complex and not easily implemented in rural areas. To add to the difficulty, breast cancer is a highly heterogeneous disease. The heterogeneity means that a single therapy is not always applicable to all patients and every patient requires an individual treatment plan. Being able to first diagnose breast cancer, and then monitor its response to therapy in a cost-effective manner is imperative to improve the survival of patients with this disease.

Optical techniques such as fluorescence are ideal for these applications since they can be fast and implemented with portable technology. These techniques use differences in light interaction with tissue to allow for abnormality detection. This dissertation tests the hypothesis that the fluorescent molecularly specific agents, protoporphyrin IX (PpIX) and 2-NBDG, which utilize metabolic alterations caused by cancer, can be used for ubiquitous breast cancer differentiation and therapy monitoring. Confocal microscopy is used to demonstrate the applicability of both agents in vitro to breast cancer cells regardless of phenotype.

First, 5-aminolevulinic acid (ALA) was incubated with cells causing an increased cellular production of the heme prequel, protoporphyrin IX (PpIX). In cancer cells, the production of PpIX is higher and allows for detection from normal after a 2 hour incubation period. The PpIX was then detected via confocal microscopy and the change in fluorescence intensity between ALA-induced PpIX and controls was measured. A spectroscopy measurement is also completed on a second experimental set of cells to demonstrate that collection of single spectra, post-ALA administration, can discriminate breast cancer cells from normal mammary epithelium.

2-NBDG is a fluorescent glucose analogue that is follows the metabolic pathway of glycolysis, similarly to D-glucose and fluorodeoxyglucose (FDG). Greater accumulation of 2-NBDG can occur in as little as 20 minutes in cells with higher glycolytic demand, which is commonly associated with cancer and hypoxic cells. The shorter incubation period required for 2-NBDG makes it ideal for clinical use, and 2-NBDG was therefore tested further.

2-NBDG uptake was used to detect changes in cellular glycolysis after anti-cancer and endocrine therapy. The anti-cancer therapies, lonidamine and a-cyano-hydroxycinnamate (a-Cinn), which increased and decreased glycolysis, respectively were tested on a subset of breast cancer cells. Lonidamine directly inhibits the metabolism of 2-NBDG and inhibited its uptake. a-Cinn stimulates glycolysis by inhibiting the monocarboxylate transporter 1 preventing lactate from entering as a source for oxidative phosphorylation. 2-NBDG was concurrently increased after a-Cinn treatment. Observation of changes in downstream glycolysis has been determined after the estrogen receptor therapy, tamoxifen, in breast cancer cells. Sixty percent of all breast cancers are estrogen receptor positive (ER+) and have the potential to respond. Known ER+ cells, MCF7, and ER- cells, MDA-MB-435, were treated with tam. 2-NBDG was used to determine therapeutic responders from non-responders by measureable differences in fluorescence uptake.

Finally, the effect of hypoxia, low oxygenation, on 2-NBDG uptake is discussed. The cellular response to hypoxia, known as the Pasteur Effect, causes an increase in glycolysis. Hypoxia is shown in vitro to increase 2-NBDG uptake. Simulated, chronic and cycling hypoxia were completed in vitro with subsequent increases in 2-NBDG as well. Cycling hypoxia has been previously shown to have a greater impact on tumor environment and was implemented in an in vivo murine dorsal window chamber mammary carcinoma model. The uptake of 2-NBDG in tumor and normal tumor-free tissue was tested and 2-NBDG discriminated normal from tumor in a normal oxygen environment. An increase in 2-NBDG was demonstrated after cycling hypoxia in tumor and normal tissue. However, by including hemoglobin saturation data, cycling hypoxic tumor tissue can be discriminated from cycling hypoxic normal tissue and normoxic tumor tissue. From these experiments, the applicability of 2-NBDG as a method to monitor changes in glycolysis and its increased potential by including hemoglobin