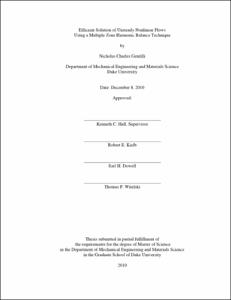 An efficient two-dimensional multiple zone harmonic balance solver for calculating unsteady nonlinear flows is presented. The solver adapts Roe's flux difference splitting algorithm such that it can be used to discretize the harmonic balance equations. It is demonstrated that the numerical solutions produced by this solver are in good agreement with known results for a variety of unsteady flows, including cascade flows. The solver incorporates a multiple zone technique in which the number of harmonics is allowed to vary in different zones of a flow domain. In the present study, the multiple zone technique is optimized for unsteady nonlinear transonic flows. It is shown that the multiple zone technique reduces computational time by 50-60% in comparison to single zone solutions. It is additionally shown that these computational savings come with no change in the accuracy of the solution.