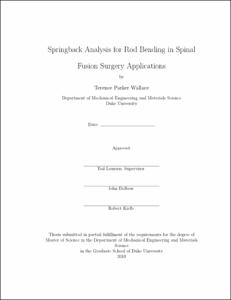 Spinal fusion is quickly becoming a common surgical operation in today's medical field. A major component of spinal fusion surgery is the use of metal rods. These rods, which are made of titanium or stainless steel, must be bent in such a way to hold the spine in the correct configuration. This part of the surgery is very time consuming and tiring for the surgeon, which increases the risk to the patient. A device is being designed that would automatically bend the rods to match a flexible pattern formed by the surgeon. A major consideration in the design of this device is predicting the amount of springback exhibited by the rod when bent. This thesis discusses a method of determining that springback. First, an experimental setup is designed and used to bend surrogate rods to certain angles. This experimental data is compared to a numerical simulation of the bending. The material model in the simulation uses a stress-strain curve derived from tensile test data. It was found that at bend angles less than 60 degrees, the simulation results are accurate enough to predict springback. Therefore, a curve was fit to the data, and the resulting polynomial equation was used to solve for the bend angle to which the rod would need to be bent in order to obtain a desired angle. However, the simulation became inaccurate at higher bend angles. It was found that a mesh finer than that which was used for the simulation resulted in better agreement with the experimental values. In conclusion, it was shown that a numerical simulation could be used to produce accurate springback values in order to develop a prediction algorithm for a rod bending device.