Stream segregation on a single electrode as a function of pulse rate in cochlear implant listeners. 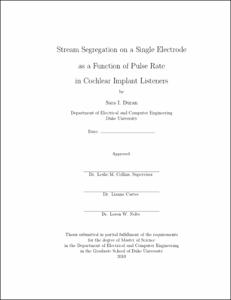 View / Download
1.4 Mb
Date
Author
Duran, Sara I.
Advisors
Collins, Leslie M
Cartee, Lianne
Nolte, Loren W.
Repository Usage Stats
408
views
531
downloads
Abstract
While cochlear implants usually provide a high level of speech recognition in quiet, speech recognition in noise and music appreciation remain challenging. In response to these issues, several studies have proposed increasing the number of channels of information through multiple pulse rate strategies. For the selection of pulse rates, studies of multi-rate strategies have considered implementation issues such as harmonics, pitch saturation, and tonotopic order but have not considered the fundamental perceptual question of whether two pulse rates can provide independent channels of information on a single electrode. This study measures stream segregation as an indicator of whether different pulse rates on the same electrode can be perceived independently. This approach differs from that of previous stream segregation studies which focused on stimulation of alternating electrodes, with the motivation of determining a relationship between electrode stream segregation and speech perception in challenging noisy environments. Stream segregation in this study was measured using two stimulus sequences following an A-B-A-B structure where A and B were different pulse rates stimulatingthe same electrode. The timing between A and B was controlled to provide either aregular or irregular gap between the two pulse trains. The threshold at which subjects could distinguish a regular rhythm from an irregular rhythm was used as an estimate of stream segregation since detecting an irregular rhythm is an easier task when the streams are fused. Stream segregation in cochlear implant users, as with normal hearing listeners, was hypothesized to be influenced by factors such as frequency and the relative timing between tones. To attempt to assess the relationship between these and stream segregation, subjects’ rate discrimination and gap detection abilities were also measured. The results of this study indicate that stream segregation can occur for two pulse rates on a single electrode; thus, it may be possible to use pulse rates to create additional channels of information. Further, the stream segregation results were not strongly correlated with the gap detection or rate discrimination results. The lack of correlation with the gap detection results suggests that the task was measuring a separate perceptual phenomenon rather than providing another measure of gap detection. The lack of correlation with the rate discrimination results suggests that discriminability may not be a limiting factor in selecting rates for segregation. These results may have implications for the future design of multi-rate speech processing strategies.
Type
Master's thesis
Department
Electrical and Computer Engineering
Subject
Acoustic Stimulation
Adult
Aged
Audiometry
Auditory Threshold
Cochlear Implantation
Cochlear Implants
Correction of Hearing Impairment
Cues
Female
Humans
Male
Middle Aged
Noise
Perceptual Masking
Periodicity
Persons With Hearing Impairments
Prosthesis Design
Psychoacoustics
Recognition (Psychology)
Signal Processing, Computer-Assisted
Speech Perception
Time Factors
Time Perception
Permalink
https://hdl.handle.net/10161/3152
Citation
Duran, Sara I. (2010). Stream segregation on a single electrode as a function of pulse rate in cochlear implant listeners. Master's thesis, Duke University. Retrieved from https://hdl.handle.net/10161/3152.
Collections
More Info
Show full item record