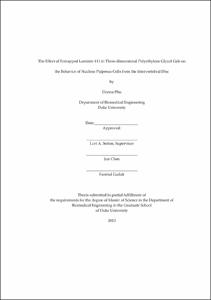 The intervertebral disc (IVD) is a fibro-cartilaginous tissue that supports and distributes loads applied to the spine. The two main tissues types of the IVD are the anulus fibrosus (AF), which is comprised of highly organized collagen fibers arranged in lamellae, and the nucleus pulposus (NP), which is a soft, gelatinous tissue in the center

of the disc. IVD disorders and associated back pain may be preceded by biological and anatomical alterations in the disc, where the most significant changes are found in the NP. Disc degeneration is characterized by a decrease in cellularity and disc height, and a

replacement of the immature notochordal-like cells with chondrocytic cells. Previous work in our lab has identified the expression of specific isoforms of laminin, an ECM protein found in many tissue types, and laminin receptors in the immature NP tissue. It is widely known that ECM molecules provide biological signals that regulate many cell functions, including cell adhesion, differentiation and ECM production.

The overall aim of this thesis is to incorporate specific laminin isoforms identified in the NP into a three-dimensional (3D) hydrogel and promote the synthesis of an NP-like matrix to engineer a viable NP replacement. To generate such a hydrogel, the entrapping capabilities of laminin-111 (LM-111) in polyethylene glycol diacrylate (PEGDA), agarose and alginate were first assessed through immunostaining and confocal microscopy. Additionally, studies were performed to examine the behavior of porcine NP cells in LM-111 laden 3D hydrogels after culture for 28 days. Findings suggest that a photocrosslinkable system, such as the PEGDA used in this study or other covalent crosslinking systems, may be necessary to maintain the structural integrity of the cell constructs for long-term culture. LM-111 promoted greater cell viability when cultured in PEGDA gels, but did not affect the production of type I and II collagen and sulfated-glycosaminoglycans in the ECM of the constructs. Additionally, after 28 days of culture, the constructs exhibited higher compressive moduli than reported literature values of native human NP tissue. The studies presented here demonstrate that the full-length LM-111 protein can be physically entrapped in 3D hydrogels. Furthermore, LM-111 can influence NP cell survival in vitro when presented in a 3D environment. The results indicate that PEGDA hydrogels that present biological cues such as laminin ECM molecules may serve as versatile platform for engineering of soft, cartilaginous tissues such as the NP.