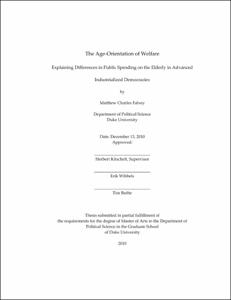 Only recently have scholars begun to focus directly on one of the starkest dimensions of variation in advanced welfare states - the extent to which aggregate social spending is geared specifically to the elderly. Progress toward an understanding of these differences would be aided by scholarly debate, but this field of inquiry remains characterized by lone theories advanced in isolation. This paper seeks first to situate the question within long-standing scholarly debates by identifying implicit hypotheses within the three major branches of welfare state theory and assessing them for their empirical and logical plausibility. A new theory is then advanced linking these differences to cross-national differences in the strength of employment protection. The paper concludes with a brief discussion of potentially fertile research avenues.