Mechanisms of Messenger RNA Localization to the Endoplasmic Reticulum: Purification of Native Polyribosomes for Proteomic Analysis of RNA-Binding Protein Composition 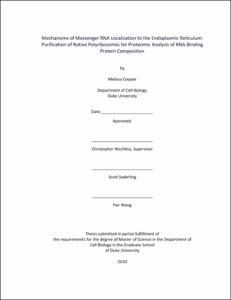 The accepted mechanism for mRNA partitioning to the endoplasmic reticulum (ER) is the signal recognition particle (SRP) pathway. Although this model is well established, substantial experimental evidence exists to suggest additional mechanisms of localizing mRNAs to the ER. For example, evidence for ribosome independent mRNA association with the ER, as well as signal sequence and translation independent mRNA localization to the ER, has been reported. It has been hypothesized that there exist mRNA-binding proteins that, through interactions with mRNA-intrinsic localization elements, serve essential roles in the partitioning of mRNAs between cytosolic and ERbound ribosomes.

A method was devised for comparing the RNA-binding proteins associated withentire populations of cytosolic and ER-bound polysomes. In this method, cytosolic and ER-bound polysomes are isolated from tissue culture cells via a sequential detergent extraction method: digitonin permeabilization of the plasma membrane to release cytosolic polysomes followed by lysis of the ER membrane to obtain ER-bound polysomes. Purified polysomes are then subjected to mild digestion with micrococcal nuclease, the ribosomes pelleted via ultra-centrifugation, and the supernatants containing RNA-binding proteins submitted for proteomic analysis via mass spectrometry. Candidate proteins for a role in mRNA localization to the ER will be those enriched in ER-bound polysomes. However, while characterizing this method for generating RNA-binding protein enriched and ribosomal protein depleted samples for proteomic analysis, many concerns have been identified that need further optimization and careful consideration prior to investing the time and resources into a mass spectrometry-based analysis of such samples.

An immunoaffinity isolation approach was taken to interrogate mRNA-specific RNA-binding protein composition. In this approach, an anti-lambda light chain antibody was used for the isolation of lambda light chain polysomes from J558 plasmacytoma cells via immunoprecipitation of the nascent polypeptide chains.