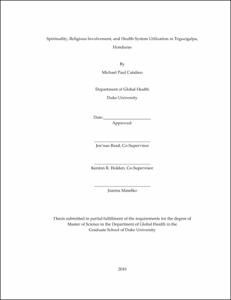 Background: Spirituality and religious practices can motivate proactive health behavior. Although beliefs and practices may lead to different health behaviors, it is important to recognize the contribution of both to allopathic and complementary and alternative health system utilization. There is a lack of empirical research in this area, especially in Honduras, containing a culture rich in spirituality and religious affiliation.

Conclusion: Self-rated spirituality and religious involvement are significantly associated with the utilization of the preventive and curative allopathic health systems and adherence to medication in Tegucigalpa, Honduras. These findings deserve further consideration and have implications in both health policy and patient care in Honduras, a country with a thriving spiritual and religious culture.