Understanding the Resume: The Impact of Occupation on Policy Entrepreneurship in the North Carolina State Legislature 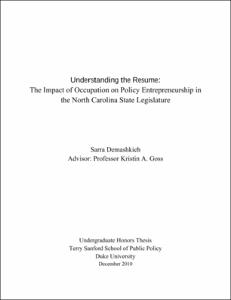 View / Download
188.5 Kb
Date
Author
Demashkieh, Sarra
Repository Usage Stats
382
views
319
downloads
Abstract
This thesis examines the impact occupation has on policy entrepreneurship in the North Carolina State Legislature. This study examines the frequency at which legislators with different occupational backgrounds sponsor bills in their corresponding occupational policy fields. Policy categories are broken down into four female, four male, and one gender neutral category to ascertain whether the “gender effect” often seen in legislatures is in fact an “occupation effect.” This study finds that the difference in bill sponsorship was statistically significant only for the four female policy groups but not the male and control groups. Workers coming from female policy categories tended to sponsor more bills than non-workers. Legislators from the “female” occupations also tended to sponsor more bills in the other three female policy categories. This pattern was not true of legislators from the “male” occupations. The study concludes that the gender effect is in fact an occupation effect in female policy categories and that legislators coming from female professions behave like “women” regardless of gender.
Type
Honors thesis
Department
Public Policy Studies
Subject
Gender effect
State Legislatures
Occupation
Permalink
https://hdl.handle.net/10161/3161
Citation
Demashkieh, Sarra (2010). Understanding the Resume: The Impact of Occupation on Policy Entrepreneurship in the North Carolina State Legislature. Honors thesis, Duke University. Retrieved from https://hdl.handle.net/10161/3161.
Collections
More Info
Show full item record