Between Migration and Belonging: Citizenship Policy in Spain and Ireland in the 21st Century 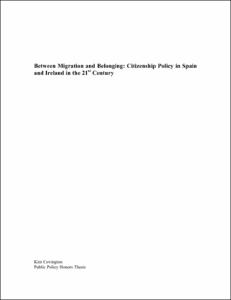 View / Download
694.2 Kb
Date
Author
Covington, Kimberly
Repository Usage Stats
476
views
958
downloads
Abstract
After an economic boom in the 1990’s, Ireland has experienced a more concentrated and sudden in-migration than any European country in the past decade. Spain, too, attracted a sudden inflow of immigrants with its economic success beginning in the 1990s and amplified through the early 2000s. As both of these countries have struggled to redefine and revise their immigration policies to accommodate these changes, one very important piece of the immigration puzzle has also come under scrutiny: citizenship. Citizenship policy is a window into how a country defines itself and its willingness to accept foreigners into that defined space. Ireland and Spain are two countries that, for most of their history, never had a significant foreign presence that might challenge their definitions of inclusion in this way. This very recent immigration timeline in each, therefore, makes them two very unique environments in which to study citizenship policy. Given this confluence of circumstances, the following analysis will attempt to illuminate how the citizenship policies of Spain and Ireland affect who becomes a citizen in each country. By linking the language of these policies to observable data of naturalization, it will be possible to see more clearly both the implications of these policies as well as possible outside factors that affect who becomes a citizen and how these shape the identity of these two countries.
Type
Honors thesis
Department
Public Policy Studies
Subject
Citizenship policy
Ireland
Spain
European Union
Permalink
https://hdl.handle.net/10161/3177
Citation
Covington, Kimberly (2010). Between Migration and Belonging: Citizenship Policy in Spain and Ireland in the 21st Century. Honors thesis, Duke University. Retrieved from https://hdl.handle.net/10161/3177.
Collections
More Info
Show full item record