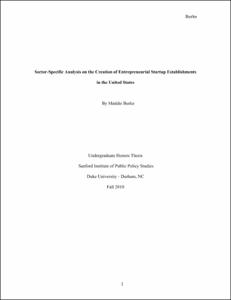 View / Download
700.8 Kb
Date
Author
Burke, Madison
Repository Usage Stats
764
views
459
downloads
Abstract
Amidst attempts to recover from one of the worst recessions since the Great Depression, economists continue to analyze the role of entrepreneurship within the United States economy. While many economists focus on the availability and characteristics of individual entrepreneurs, other scholars attempt to address economic factors that create the context in which entrepreneurial opportunities to obtain economic profit form. While the findings of these studies continue to highlight the important role of entrepreneurship within the U.S. economy, critics note the use of aggregate data as a potential confounding factor. In order to contribute to the empirical analysis of entrepreneurship, this paper analyzes the effects of value added as a percentage of U.S. GDP (VA%GDP), national U.S. unemployment rates (UNEMP), and periods of recession (PROX) on entrepreneurship across each of the ten major U.S. industries from 1977-1999. The study finds that new establishments across U.S. industries exhibit varying responses to the selected explanatory variables, indicating that economic factors do not have universal effects on entrepreneurship across different U.S. industries. The study also finds that value added as a percentage of U.S. GDP had the largest effect on the number of new establishments across U.S. industries from 1977-1997, appearing statistically significant in six of the nine industry models and positive in five of the six. National U.S. unemployment rates exhibited the second largest effect on the number of new establishments across U.S. industries, appearing statistically significant and negative in three of nine industries. Finally, periods of economic recession, measured by a proxy variable, only appeared in one of the nine industry models, and it was not statistically significant. The results of this research suggest that economic predictors of entrepreneurship across major U.S. industries differ dramatically. As a result, as new data continues to highlight the link between entrepreneurship and economic growth, job creation, and policy, scholars must consider each industry independently in order to correctly predict and stimulate entrepreneurship in the United States.
Type
Honors thesis
Department
Public Policy Studies
Subject
entrepreneurship, recession,
start-ups, entrepreneurial activity
Permalink
https://hdl.handle.net/10161/3184
Citation
Burke, Madison (2010). Sector-Specific Analysis on the Creation of Entrepreneurial Startup Establishments in the United States. Honors thesis, Duke University. Retrieved from https://hdl.handle.net/10161/3184.
Collections
More Info
Show full item record