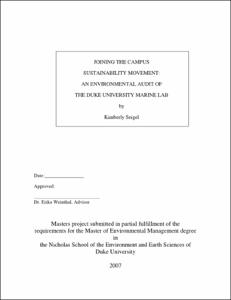 View / Download
331.0 Kb
Date
Author
Seigel, Kimberly
Advisor
Weinthal, Erika
Repository Usage Stats
526
views
1,069
downloads
Abstract
The Sustainability Revolution commenced as a reaction to the environmental degradation caused by the Industrial Revolution. The Sustainability Revolution introduced the general public to the three pronged approach of sustainability: uniting economics, the environment, and society. The Campus Sustainability Movement represents one of the sub-movements within the Revolution. This Movement introduced the trend to evaluate and audit campus environmental practices and policies, and monitor their impacts on the environment. In 1989, the University of California at Los Angeles conducted the first campus environmental audit in the United States. Their audit looked at various campus practices such as water and energy consumption, waste management, and procurement practices. This audit paved the way for several colleges and universities worldwide. In the fall of 2006, the Duke University Marine Lab, located in Beaufort, NC, embarked on a Green Initiative. In order to facilitate the process of the Initiative, the Marine Lab called for an environmental audit of their current practices. Due to time constraints, this masters project focuses solely on energy consumption at the Lab, in the form of electricity consumption. Previous campus audits conducted at other universities were referenced to guide the audit’s research questions. Financial records and kilowatt-hour meter readings from 1999 through 2006 were collected as a means to identify exactly where the Marine Lab must make adjustments. Although some of the data appears to be flawed, it still reveals some encouraging trends at the Marine Lab, namely that energy consumption has decreased over the past 6 years. This masters project recommends that in order to see additional improvements, all buildings at the Marine Lab must have meters on them. Furthermore, this masters project suggests that communication between the Marine Lab and the Facilities Management Department in Durham be improved.
Type
Master's project
Department
Nicholas School of the Environment and Earth Sciences
Subject
Campus Sustainability Movement
University of California at Los Angeles
Duke University Marine Laboratory
Beaufort, North Carolina
Green Initiative
Facilities Management
Permalink
https://hdl.handle.net/10161/319
Citation
Seigel, Kimberly (2007). JOINING THE CAMPUS SUSTAINABILITY MOVEMENT: AN ENVIRONMENTAL AUDIT OF THE DUKE UNIVERSITY MARINE LAB. Master's project, Duke University. Retrieved from https://hdl.handle.net/10161/319.
Collections
More Info
Show full item record