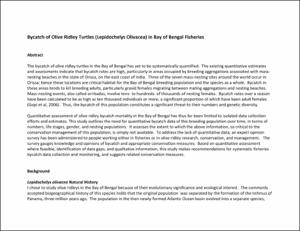 Files
Thesis.docx
580.3 Kb
Helmbrecht_2010.pdf
828.4 Kb
Date
Author
Helmbrecht, S
Repository Usage Stats
375
views
1,200
downloads
Abstract
The bycatch of olive ridley turtles in the Bay of Bengal has yet to be systematically quantified. The existing quantitative estimates and assessments indicate that bycatch rates are high, particularly in areas occupied by breeding aggregations associated with mass‐nesting beaches in the state of Orissa, on the east coast of India. Three of the seven mass‐nesting sites around the world occur in Orissa; hence these locations are critical habitat for the Bay of Bengal breeding population and the species as a whole. Bycatch in these areas tends to kill breeding adults, particularly gravid females migrating between mating aggregations and nesting beaches. Mass‐nesting events, also called arribadas, involve tens‐ to hundreds‐ of thousands of nesting females. Bycatch rates over a season have been calculated to be as high as ten thousand individuals or more, a significant proportion of which have been adult females (Gopi et al, 2006). Thus, the bycatch of this population constitutes a significant threat to their numbers and genetic diversity. Quantitative assessment of olive ridley bycatch mortality in the Bay of Bengal has thus far been limited to isolated data collection efforts and estimates. This study outlines the need for quantitative bycatch data of this breeding population over time, in terms of numbers, life stages, gender, and nesting populations. It assesses the extent to which the above information, so critical to the conservation management of this population, is simply not available. To address the lack of quantitative data, an expert opinion survey has been administered to people working either in fisheries or in olive ridley research, conservation, and management. The survey gauges knowledge and opinions of bycatch and appropriate conservation measures. Based on quantitative assessment where feasible, identification of data gaps, and qualitative information, this study makes recommendations for systematic fisheries bycatch data collection and monitoring, and suggests related conservation measures.
Type
Master's project
Department
Nicholas School of the Environment and Earth Sciences
Permalink
https://hdl.handle.net/10161/3193
Citation
Helmbrecht, S (2011). Bycatch of olive ridley turtles (Lepidochelys olivacea) in Bay of Bengal Fisheries. Master's project, Duke University. Retrieved from https://hdl.handle.net/10161/3193.
Collections
More Info
Show full item record