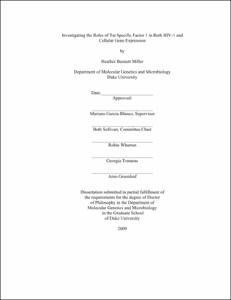 HIV-1 relies on both viral and cellular host factors for expression of its genome. Tat specific factor 1 (Tat-SF1) was identified as a cellular cofactor required for enhanced transcription of HIV-1 <italic>in vitro</italic>. Insight into the role of Tat-SF1 in the HIV-1 lifecycle has previously been limited to immunodepletions and <italic>in vitro</italic> analyses or transient overexpression experiments. Here, we present studies that utilize RNA interference (RNAi) to reevaluate Tat-SF1's role in Tat transactivation and HIV-1 replication <italic>in vivo</italic>. We report that although Tat-SF1 depletion reduces HIV-1 infectivity, it does not affect Tat transactivation <italic>in vivo</italic>. However, Tat-SF1 depletion changes the levels of unspliced and spliced RNAs. We propose that Tat-SF1 has a novel role of post-transcriptionally regulating HIV-1 gene expression, possibly through alternative splicing.

The functions of Tat-SF1 in cellular gene expression are not well understood, so we utilized the stable cell lines constructed for our HIV-1 studies to investigate the cellular functions of Tat-SF1. To identify target genes of Tat-SF1, we employed a combination of RNAi and human exon arrays. These arrays, which survey both transcript-level and exon-level changes genome-wide, revealed approximately 1,400 genes with alternative exon usage after Tat-SF1 depletion (p&le;0.01). In contrast, 500 genes showed significant transcript-level changes (p&le;0.01), all with minimal fold changes. Computational analyses showed that genes with alternative exon usage after Tat-SF1 depletion were over-represented in the insulin signaling and ubiquitin mediated proteolysis biological pathways. Furthermore, there was approximately 2-fold enrichment of Tat-SF1 target genes among previously reported HIV-1 dependency factors. The type of exon choice affected by Tat-SF1 depletion exhibited a strong 5&rsquo; bias. Finally, a novel Tat-SF1 binding motif, GACGGG, was found to be over-represented among target genes and may play a functional role in first exon choice. Together, these data are the strongest evidence to date of Tat-SF1 functioning in both transcription and splicing of cellular genes.