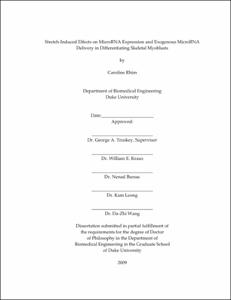 The research presented here represents a quest to understand and address limitations in the field of skeletal muscle tissue engineering, with hopes to better understand the factors involved in producing viable engineered skeletal muscle tissue. The driving force behind this research was to address two of the many factors important in muscle cell proliferation and differentiation, toward developing mature and functional bioartificial skeletal muscles (BAMs). Our work focused on understanding the individual effects of mechanical stimulation and microRNAs (miRNAs), as well as the synergistic relationship between the two factors. We hypothesized that (1) myoblast proliferation and differentiation are modulated by mechanical stimulation via temporally regulated miRNAs and that (2) modulating these miRNAs can enhance skeletal muscle function in a 3D tissue-engineered system.

We first established a BAM system using C2C12 mouse myoblasts in a collagen gel, showing that these cells were able to produce mature sarcomeres when cultured under steady, passive tension for up to 36 days. Staining muscle-specific proteins and electron microscopy showed distinct striations and myofiber organization as early as 6 days, post-differentiation. At 33 days, cultures contained collagen fibers and showed localization of paxillin at the fiber termini, suggesting that myotendinous junctions were forming.

We then focused on the effects of mechanical stimulation on C2C12 myoblasts in a more simple, 2D system. In particular, we assessed miRNA and muscle-specific gene expression over time and in response to two cyclic stretch regimens using miRNA microarray technology and quantitative real time RT-PCR. Both miRNAs and certain genes, such as SRF and Mef2c, had differential responses to the two regimens. Over-expression and inhibition studies of one muscle-specific miRNA, miR-1, abrogated the stretch response and suggest that a balancing mechanism is in place to avoid large fluctuations in miRNA levels.

Finally, since miRNA modulation quenched the stretch-mediated response in myoblasts, we chose to examine 3D BAM function when miRNA levels were altered to promote differentiation. Using the same collagen gel model established previously, a muscle-specific miRNA, miR-133, known to promote proliferation, was transiently inhibited (anti-miR-133) to encourage differentiation. Forces in the anti-miR-133 BAMs were, on average, 20% higher over the negative control. Further, myofiber diameters were significantly greater and striations were more organized in the anti-miR-133 BAMs, suggesting that transient, exogenous delivery of miRNAs may be a viable approach to create a more fully differentiated muscle.