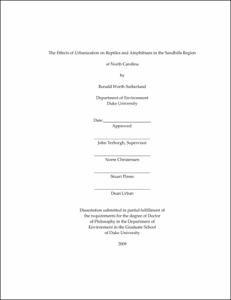 Rapid urbanization threatens the survival of native wildlife species worldwide. In order to fully grasp the implications of the ongoing growth of urban areas on biodiversity, conservationists need to be able to quantify the response patterns of a wide range of different species to the expansion of urban and suburban land use. In this study, we set up two road-based transects across gradients of urbanization and habitat loss in the diverse longleaf pine forests of the Sandhills region of North Carolina, USA. With funding provided by the NC Wildlife Resources Commission, we drove the transects repeatedly at night in the field seasons of 2006-2008, tallying all vertebrate animals encountered (live or dead). The first transect (driven in all three years; 75 km long) ran from the urban areas of Southern Pines and Pinehurst down to the remote and relatively pristine habitats associated with the state-owned Sandhills Gamelands. The second transect (driven in 2007 and partially in 2008; 69 km long) began at the terminus of the first transect in the Gamelands, and then stretched down to the urban zones of Hamlet and Rockingham.

A total of 4900 vertebrate animals representing 69 species were observed on or near the road routes after driving a total of 16,625 km. This total includes 592 nightjars (ground-nesting nocturnal birds; e.g. whip-poor-wills) that we heard while driving the transects. In addition, in 2007 we surveyed for the nightjars and for quail (a high-priority game species that also nests on the ground) using 75 point count locations evenly distributed along the northern road route.

Regression tree analysis (a robust, nonparametric technique with minimal assumptions) was used to model the animal observation rates for a given 1 km road segment or point count as a function of various habitat variables measured within corresponding buffer zones for each segment. We also modeled snake and bird encounter rates as a function of mesopredator mammal observations.

Our results reveal that amphibian, snake, and ground-nesting bird observation rates are negatively associated with increasing levels of traffic and impervious surface. Conversely, mesopredator mammals (and domestic cats in particular) responded slightly positively to increasing urbanization, and negatively to protected area coverage. Both ground-nesting birds and snakes showed signs of negative correlations with mesopredator encounter rates, although these trends were not always significant due to high variability in the mesopredator data.

In order to try and confirm the results of the regression tree analyses, we also used a multivariate ordination approach (non-metric multidimensional scaling) to visualize the integrated community structure of all of the major vertebrate groups we observed in the Sandhills. The ordinations revealed that while the snake, ground-nesting bird, and amphibian groups were similar to each other in terms of their avoidance of urban conditions, the cats and native mesopredator species actually seemed to define widely divergent axes of community variation. Cats in particular were separated from the other groups on 2 out of 3 axes of the species-space ordination. Still, as we noted above for the regression tree models, it is difficult to sort out with our correlative data set whether cats and other mesopredators truly played an independent role in structuring and/or depleting the other wildlife guilds along our route. More experimental approaches are recommended for trying to resolve whether overabundant predators or road mortality and inappropriate habitat are more to blame for the much reduced encounter rates we observed for the snakes, birds, and amphibians in urban areas. Future studies will also be needed to confirm the logical assumption that road encounter rates provide a reasonably accurate index of the relative abundance of the different animal groups along the survey routes.