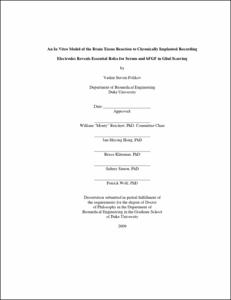 Chronically implanted recording electrode arrays linked to prosthetics have the potential to make positive impacts on patients suffering from full or partial paralysis [1;2]. Such arrays are implanted into the patient's cortical tissue and record extracellular potentials from nearby neurons, allowing the information encoded by the neuronal discharges to control external devices. While such systems perform well during acute recordings, they often fail to function reliably in clinically relevant chronic settings [3]. Available evidence suggests that a major failure mode of electrode arrays is the brain tissue reaction against these implants (termed the glial scar), making the biocompatibility of implanted electrodes a primary concern in device design. Previous studies have focused on modifying the form factor of recording arrays, implanting such arrays in experimental animals, and, upon explantation, evaluating the glial scarring in response to the implant after several weeks in vivo. Because of a lack of information regarding the mechanisms involved in the tissue reaction to implanted biomaterials in the brain, it is not surprising that these in vivo studies have met with limited success. This dissertation describes the development of a simple, controlled in vitro model of glial scarring and the utilization of that model to probe the cellular and molecular mechanisms behind glial scarring.

A novel in vitro model of glial scarring was developed by adapting a primary cell-based system previously used for studying neuroinflammatory processes in neurodegenerative disease [4]. Midbrains from embryonic day 14 Fischer 344 rats were mechanically dissociated and grown on poly-D-lysine coated 24 well plates to a confluent layer of neurons, astrocytes, and microglia. The culture was injured with either a mechanical scrape or foreign-body placement (segments of 50 mm diameter stainless steel microwire), fixed at time points from 6 h to 10 days, and assessed by immunocytochemistry. Microglia invaded the scraped wound area at early time points and hypertrophied activated astrocytes repopulated the wound after 7 days. The chronic presence of microwire resulted in a glial scar forming at 10 days, with microglia forming an inner layer of cells coating the microwire, while astrocytes surrounded the microglial core with a network of cellular processes containing upregulated GFAP. Neurons within the culture did not repopulate the scrape wound and did not respond to the microwire, although they were determined to be electrically active through patch clamp recording.

This initial model recreated many of the hallmarks of glial scarring around electrodes used for recording in the brain; however, the model lacked the reproducibility necessary to establish a useful characterization tool. After the protocol was amended to resemble protocols typically used to culture neural stem/precursor cells, an intense scarring reaction was consistently seen [5]. To further optimize and characterize the reaction, six independent cell culture variables (growth media, seeding density, bFGF addition day, serum concentration in treatment media, treatment day, and duration of culture) were varied systematically and the resulting scars were quantified. The following conditions were found to give the highest level of scarring: Neurobasal medium supplemented with B27, 10% fetal bovine serum at treatment, 10 ng/ml b-FGF addition at seeding and at treatment, treatment at least 6 days after seeding and scar growth of at least 5 days. Seeding density did not affect scarring as long as at least 500,000 cells were seeded per well, but appropriate media, bFGF, and serum were essential for significant scar formation.

The optimized in vitro model was then used to help uncover the underlying molecular and cellular mechanisms behind glial scarring. A microwire coating that mimics the basal lamina present within glial scars was developed that allows cells responding to the coated microwire to be isolated and evaluated (i.e. through cell counting or cell staining). A panel of soluble factors known to be involved in glial scar formation was added to the media and the cellular response was recorded. The extent of cell accumulation on the coated microwires was significantly increased by titration of the culture with serum, the pleotropic growth factor bFGF, the inflammatory cytokines IL-1&alpha; and IL-1&beta;, and the growth factors PDGF and BMP-2. The other fourteen soluble factors tested had little to no effect on the number of cells that attached to the coated microwires, although a specific blocker of the bFGF receptor was able to abrogate the effect of bFGF. This study proposes essential roles in glial scarring of serum, which infiltrates brain tissue upon disruption of the blood-brain barrier, and bFGF, which is a necessary growth and survival factor for the neural precursor cells that respond to injury. These insights suggest repeated rounds of implant micromotion-induced cellular damage, with the resultant neuronal death, serum release, and bFGF deposition may thicken the glial scar and lead to recording signal loss.