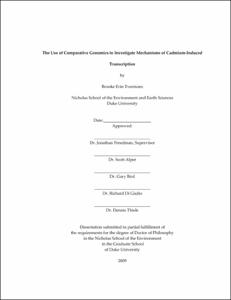 Cadmium is a human carcinogen and a persistent environmental pollutant of increasing concern. Yet, the exact molecular targets of cadmium toxicity and the molecular mechanisms by which cadmium influences gene expression have not been fully elucidated. Therefore, the characterization of cadmium-inducible genes will provide a better understanding of the underlying mechanism involved in sensing cadmium-stress and the subsequent signaling pathways important for cellular defense against cadmium toxicity. To this end, we characterized two cadmium-responsive genes of no known biological function from the nematode Caenorhabditis elegans (C. elegans), numr-1 and numr-2.

Expression analysis of numr-1 and numr-2 revealed the same temporal and spatial expression patterns of both genes in the absence and presence of metal treatment. In the absence of metal, constitutive expression of numr-1/-2 was developmentally regulated. When adult animals were exposed to metal, numr-1/-2 expression dramatically increased. We show that worms overexpressing numr-1/-2 were more resistant to metal stress and longer lived than control animals; whereas reducing numr-1/-2 activity resulted in increased sensitivity to metal exposure. Furthermore, in the absence of metal, the two numr-1 mutant alleles, tm2775 and ok2239, exhibited decreased muscular functions. The molecular characterization of numr-1 and numr-2 also revealed that the expression of these two genes, at least in part, was regulated by changes in intracellular calcium concentrations ([Ca2+]i). This finding lead us to reevaluate the role of calcium mobilization in cadmium-induced transcription.

While several studies have indicated that exposure to cadmium resulted in increased [Ca2+]i, the mechanism by which cadmium can effect [Ca2+]i and concurrent effects on gene expression remain poorly understood. Therefore, we investigated the effects of low-level cadmium exposure, sufficient to induce transcription of cadmium-responsive genes, on the regulation of [Ca2+]i. In these studies, we utilized the protein-based calcium sensor YC 3.60 stably expressed in a HEK293 cell line. YC 3.60 is insensitive to cadmium ions, and thus is useful to monitor changes in [Ca2+]i following cadmium treatment. Exposing HEK293 cells to 1-30 µM cadmium was sufficient to induce transcription of cadmium-responsive genes such as metallothionein. Cadmium exposure from 1-10 µM had no effect on cell viability, [Ca2+]i mobilization, or increased transcriptional activity of calcium-responsive genes. In contrast, exposure to 30 µM cadmium significantly decreased cell viability, reduced intracellular calcium stores, and significantly altered the transcriptional activity of calcium-responsive genes. Taken together, these data indicate that low-level cadmium exposures (1-10 µM) can induce transcription of cadmium-responsive genes such as metallothionein independent of [Ca2+]i mobilization.

To gain further insight into the mechanistic relationship between cadmium and calcium we investigated the effects of cadmium exposure on the defecation cycle of C. elegans. Defecation is a highly rhythmic behavior that is regulated by calcium oscillations. We found that low-level cadmium exposures, sufficient to induce expression of cadmium-responsive genes such as numr-1/-2, significantly shortened the defecation cycle but did not alter the rhythm of the cycle or the magnitude of the intestinal calcium oscillations. Modulation of lipid metabolism in C. elegans results in a similar shortened defecation cycle, whereas modulation of [Ca2+]i results in lengthened and arrhythmic defection cycles, suggesting that the mechanism by which cadmium alters defecation is independent of [Ca2+]i mobilization.

In summary, the data in this work demonstrates that low-level cadmium exposure induces expression of cadmium-responsive genes independent of calcium mobilization. Thus, modulation of intracellular calcium is unlikely the primary mechanism by which cadmium regulates transcription at low-levels of exposure.