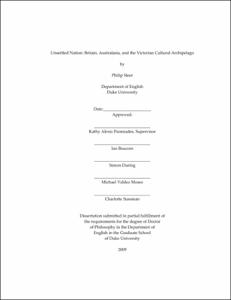 This dissertation argues that the literary, intellectual, and cultural borders of Victorian Britain extended as far as Australia and New Zealand, and that the tradition of nation-based literary criticism inherited from the Victorians has blinded Victorian Studies to that possibility. Building upon the nineteenth century concept of "Greater Britain," a term invoking the expansion of the British nation through settler colonization, I demonstrate that literary forms did not simply diffuse from the core to the periphery of the empire, but instead were able to circulate within the space of Greater Britain. That process of circulation shaped Victorian literature and culture, as local colonial circumstances led writers to modify literary forms and knowledge formations; those modifications were then able to be further disseminated through the empire by way of the networks that constituted Greater Britain.

My argument focuses on the novel, because its formal allegiance to the imagined national community made it a valuable testing ground for the multi-centered nation that was being formed by settlement. I specifically locate the Victorian novel in the context of Britain's relations with the colonies of Australia and New Zealand, which were unique in that their transition from initial settlement to independent nations occurred almost entirely during the Victorian period. The chapters of <italic>Unsettled Nation</italic> focus on realism, romance and political economy's interest in settlement; the bildungsroman and theories of discipline developed in the penal colonies; the theorization of imperial spatiality in utopian and invasion fiction; and the legacy of the Waverley novel in the portrayal of colonization in temporal terms. Each chapter presents a specific example of how knowledge formations and literary forms were modified as a result of their circulation through the archipelagic nation space of Greater Britain.

Working at the intersection between Victorian Studies and Australian and New Zealand literary criticism, I seek to recover and reconsider the geographical mobility of nineteenth century Britons and their literature. Thus, more than merely trying to cast light on a dimension of imperialism largely ignored by critics of Victorian literature, I use the specific example of Australasia to make the broader claim that the very idea of Victorian Britain can and must be profitably expanded to include its settler colonies.