The End of the Age of Miracles: Substance and Accident in the English Renaissance 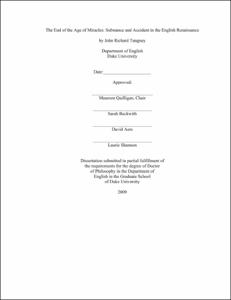 This dissertation argues that the 'realist' ontology implicit in Renaissance allegory is both Aristotelian and neoplatonic, stemming from the need to talk about transcendence in material terms in order to make it comprehensible to fallen human intelligence. At the same time dramatists at the turn of the seventeenth century undermine 'realism' altogether, contributing to the emergence of a new meaning of 'realism' as mimesis, and with it a materialism without immanent forms. My theoretical framework is provided by Aristotle's Metaphysics, Physics and Categories rather than his Poetics, because these provide a better way of translating the concerns of postmodern critics back into premodern terms. I thus avoid reducing the religious culture of premodernity to 'ideology' or 'power' and show how premodern religion can be taken seriously as a critique of secular modernity. My conclusion from readings of Aristotle, Augustine, Hooker, Perkins, Spenser, Shakespeare, Nashe, Jonson and Tourneur is that Hell is conflated with History during the transition to modernity, that sin is revalorized as individualism, and that the translatability of terms argues for the continuing need for a concept of 'substance' in this post-Aristotelian age. I end with a reading of The Cloud of Unknowing, an anonymous contemplative work from the fourteenth century that was still being read in the sixteenth century, which offers an alternative model of the sovereign individual, and helps me to argue against the view that philosophical idealism is inherently totalitarian.