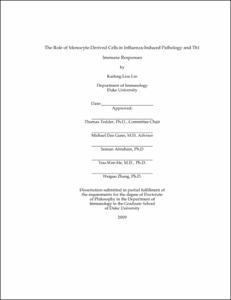 Monocytes and monocyte-derived cells are important in providing innate immunity against various pathogens. Monocytes become macrophages or dendritic cells after they enter tissues during inflammation. Macrophages phagocytose microbes and kill them intracellularly in lysosomes. After macrophages are activated, they secret a variety of cytokines as part of innate defense. However, such cytokines have been implicated in causing autoimmune diseases and influenza-induced pathology. For these reasons, we have investigated the role of monocytes and monocyte-derived cells in inducing immune pathology. Moreover, monocytes are also thought to affect adaptive immunity by shaping T cell responses. Yet the enterity of their contributions to adaptive immune response remains to be determined.

CCR2 is the chemokine receptor required for inflammatory monocytes to enter tissues, and its deficiency in mice has been shown to be protective for influenza-induced immune pathology. We hypothesized that cells that depend on CCR2 to migrate into inflammaed lungs are the cells that induce immune pathology during influenza infection. First, we identified cell types that are recruited to the lungs by CCL2. Similar myeloid cell types, monocytes, monocyte-derived DCs (moDCs), and exudated macrophages (exMAC), also accumulate in the lungs during influenza infection. We then show that these myeloid cells types are derived from monocytes, and that they produce high levels of TNF-&#945; and NOS2. Finally, we show a strong correlation between reduced accumulation of myeloid cells and decreased influenza-induced pathology and mortality in CCR2-deficient mice, suggesting that CCR2 inhibition may be a viable therapy for highly pathogenic influenza infection.

In the second part of this work, we focus on monocyte-derived dendritic cells in lymph nodes (LN). Inflammatory DCs in LN can arise from moDCs recruited via lymphatics (peripheral moDCs) and from inflammatory monocytes that enter LN directly from the blood (blood-derived moDCs). We examine the role of blood-derived moDCs in inducing LN T cell activation and polarization after immunogenic stimuli. We find that, following viral infection or immunization, inflammatory monocytes are recruited into LN directly from the blood to become CD11c<super>+<super>CD11b<super>hi<super>Gr-1<super>+<super> inflammatory DCs, which produce high levels of IL-12 (p70) and potently stimulate Th1 responses. This monocyte extravasation requires CCR2 but not CCL2 or CCR7. Thus, inflammatory DCs accumulation and Th1 responses are markedly reduced in CCR2<super>-/-<super> mice, preserved in CCL2<super>-/-<super> mice, and relatively increased in CCL19/21-Ser-deficient <italic>plt<italic> mice, in which all other LN DC types are reduced.

Our findings provide important insights into mutiple roles that monocytes play in both innate and adaptive immunity. Monocytes provide an early response against pathogens. As we now demonstrate, this response can be excessive, leading to a significant immune pathology during influenza infection that has been previously attributed to neutrophils. We also provide the first demonstration that monocytes play an important role in regulating adaptive immune responses. We find that monocyte-derived DCs are both sufficient and necessary for the development of Th1-polarized immune responses within LNs. Taken together, our results demonstrate that the roles played by monocytes in innate immunity adaptive immunity, and immune pathology are much greater than previously appreciated and that regulating monocyte function may be an effective means to regulate certain types of immune responses.