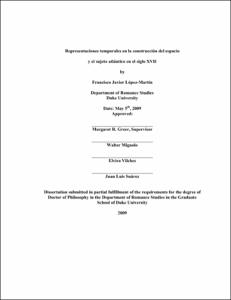 siglo XVII" is a study of the different representations of time, temporality and space in

literary and historical texts such as the chronicles that originated in Peru and Spain. This

time and that was represented in literary texts during the Spanish Baroque period. What is

Hispanic culture and the occidental episteme. This new subject is the product of a

Atlantic. During the XVIIth century, many literary and historical texts are produced in

order to understand this new subject. As an immediate consequence of the encounter

between American and European epistemes, thinkers and writers in all Europe begin to

hesitate between "the real" and "the images"; a crisis of the real begins. In the Americas,

seek to interpret the new realities brought about by the encounter with the Europeans,

whose writings do not follow to either indigenous or European conventions. These

subjectivity that the conquest produced. Similarly, Spanish writers such as Cervantes or