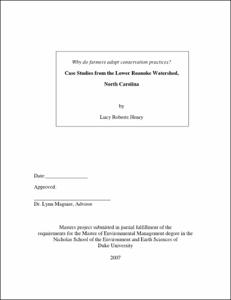 View / Download
937.7 Kb
Date
Author
Henry, Lucy Roberts
Advisor
Maguire, Lynn A
Repository Usage Stats
344
views
502
downloads
Abstract
Agricultural policy is becoming increasingly influenced by environmental policy, but achieving environmental objectives through government conservation programs remains an elusive goal. Numerous studies have shown that farmers are motivated to adopt conservation practices not only by profit incentives, but also by factors such as perceptions of good stewardship and attachment to the land. In this analysis, I use innovation-adoption theory to analyze case studies of crop farmers in the Lower Roanoke watershed in North Carolina to show how they are influenced by micro-level dynamics at the farm scale. Using this theory, I explain how farmer perceptions of conservation practices can both encourage and discourage them to adopt these practices. This analysis shows that practices that provide a perceived relative advantage, through things like labor and time savings, are more readily adopted, but practices that are perceived as incompatible with farmers’ values, needs, or relationships with landowners are frequently rejected, even when economic profits might be derived from them. I also found that farmers are strongly influenced by biophysical aspects of their farm operation and have varying, but influential, interpretations of what good stewardship looks like. Based on these findings, I suggest that conservation programs could be marketed in a more effective way by appealing to farmers’ motivations and by communicating conservation benefits in ways that take farmer perceptions into account. In particular, conservation programs should be framed in a way that educates farmers about how conservation can benefit the quality of their land, crop yields, and agroecosystem.
Type
Master's project
Department
Nicholas School of the Environment and Earth Sciences
Subject
Agriculture
Policy
Lower Roanoke Watershed, North Carolina
Permalink
https://hdl.handle.net/10161/325
Citation
Henry, Lucy Roberts (2007). Why do farmers adopt conservation practices? Case Studies from the Lower Roanoke Watershed, North Carolina. Master's project, Duke University. Retrieved from https://hdl.handle.net/10161/325.
Collections
More Info
Show full item record