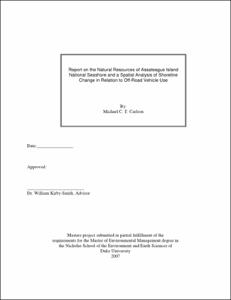 View / Download
15.8 Mb
Date
Author
Carlson, Michael C. T.
Advisor
Kirby-Smith, William
Repository Usage Stats
385
views
177
downloads
Abstract
National seashores, similar to national parks, are pristine natural areas where human management proves crucial in maintaining natural resources. This paper reports on the conditions of the aquatic and terrestrial natural resources of Assateague Island National Seashore and the possible erosional effects of Off Road Vehicles (ORV) along the shore. The first exigency Assateague Island faces is negotiating many state and federal jurisdictions. The second problem is in the management of the marine and coastal floral and faunal resources. The National Park Service (NPS), on Assateague has focused much more on land-based issues; as a result, preservation of marine resources has been secondary to consideration given to terrestrial resources. The concern over vehicle use on beaches is currently much debated on coastal seashores along the east coast of the United States. The ORV analysis in this paper looks at the potential geologic shoreline changes on Assateague Island that occur as a result of driving on the beach and sand dunes. Significant previous land use analysis on Assateague Island has been done using light detecting and ranging (LIDAR) data. Although, LIDAR data helped shed light on the effect of the Ocean City inlet in North Assateague, previously it has not been used in determining impacts of beach driving. The general conclusion of this paper indicates that from the year 2000 to 2004, significant erosion occurred near areas of high ORV use.
Type
Master's project
Department
Nicholas School of the Environment and Earth Sciences
Subject
Assateague Island National Seashore
Off Road Vehicles (ORV)
National Park Service (NPS)
Light detecting and ranging (LIDAR)
Permalink
https://hdl.handle.net/10161/327
Citation
Carlson, Michael C. T. (2007). Report on the Natural Resources of Assateague Island National Seashore and a Spatial Analysis of Shoreline Change in Relation to Off-Road Vehicle Use. Master's project, Duke University. Retrieved from https://hdl.handle.net/10161/327.
Collections
More Info
Show full item record