The effect of hydrogen bonding on the diffusion of water in n-alkanes and n-alcohols measured with a novel single microdroplet method. 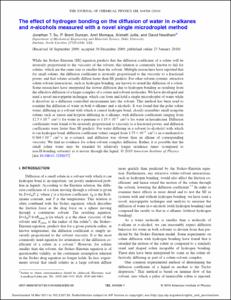 View / Download
291.1 Kb
Date
Authors
Su, Jonathan T
Duncan, P Brent
Momaya, Amit
Jutila, Arimatti
Needham, David
Repository Usage Stats
346
views
643
downloads
Abstract
While the Stokes-Einstein (SE) equation predicts that the diffusion coefficient of a solute will be inversely proportional to the viscosity of the solvent, this relation is commonly known to fail for solutes, which are the same size or smaller than the solvent. Multiple researchers have reported that for small solutes, the diffusion coefficient is inversely proportional to the viscosity to a fractional power, and that solutes actually diffuse faster than SE predicts. For other solvent systems, attractive solute-solvent interactions, such as hydrogen bonding, are known to retard the diffusion of a solute. Some researchers have interpreted the slower diffusion due to hydrogen bonding as resulting from the effective diffusion of a larger complex of a solute and solvent molecules. We have developed and used a novel micropipette technique, which can form and hold a single microdroplet of water while it dissolves in a diffusion controlled environment into the solvent. This method has been used to examine the diffusion of water in both n-alkanes and n-alcohols. It was found that the polar solute water, diffusing in a solvent with which it cannot hydrogen bond, closely resembles small nonpolar solutes such as xenon and krypton diffusing in n-alkanes, with diffusion coefficients ranging from 12.5x10(-5) cm(2)/s for water in n-pentane to 1.15x10(-5) cm(2)/s for water in hexadecane. Diffusion coefficients were found to be inversely proportional to viscosity to a fractional power, and diffusion coefficients were faster than SE predicts. For water diffusing in a solvent (n-alcohols) with which it can hydrogen bond, diffusion coefficient values ranged from 1.75x10(-5) cm(2)/s in n-methanol to 0.364x10(-5) cm(2)/s in n-octanol, and diffusion was slower than an alkane of corresponding viscosity. We find no evidence for solute-solvent complex diffusion. Rather, it is possible that the small solute water may be retarded by relatively longer residence times (compared to non-H-bonding solvents) as it moves through the liquid.
Type
Journal article
Subject
Alcohols
Alkanes
Diffusion
Hydrogen Bonding
Microchemistry
Solvents
Water
Permalink
https://hdl.handle.net/10161/3317
Published Version (Please cite this version)
10.1063/1.3298857
Publication Info
Su, Jonathan T; Duncan, P Brent; Momaya, Amit; Jutila, Arimatti; & Needham, David (2010). The effect of hydrogen bonding on the diffusion of water in n-alkanes and n-alcohols measured with a novel single microdroplet method. J Chem Phys, 132(4). pp. 044506. 10.1063/1.3298857. Retrieved from https://hdl.handle.net/10161/3317.
This is constructed from limited available data and may be imprecise. To cite this article, please review & use the official citation provided by the journal.
Collections
More Info
Show full item record Professor in the Department of Mechanical Engineering and Materials Science
Professor Needham has been at Duke since 1987 and over the years has developed many collaborative and scholarly relationships across the campus and Medical School. He holds Faculty and membership appointments as: Associate Professor of Biomedical Engineering; Center for Bioinspired Materials and Material Systems; Center for Biomolecular and Tissue Engineering; Duke Comprehensive Cancer Center; and the Duke Cancer Institute.  Internationally, he holds a joint appointment as Professor of T