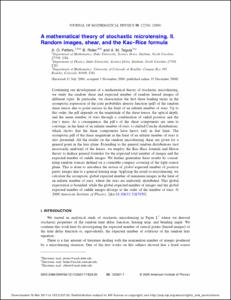 View / Download
182.2 Kb
Date
Authors
Petters, AO
Rider, B
Teguia, AM
Repository Usage Stats
320
views
255
downloads
Abstract
Continuing our development of a mathematical theory of stochastic microlensing, we study the random shear and expected number of random lensed images of different types. In particular, we characterize the first three leading terms in the asymptotic expression of the joint probability density function (pdf) of the random shear tensor due to point masses in the limit of an infinite number of stars. Up to this order, the pdf depends on the magnitude of the shear tensor, the optical depth, and the mean number of stars through a combination of radial position and the star's mass. As a consequence, the pdf's of the shear components are seen to converge, in the limit of an infinite number of stars, to shifted Cauchy distributions, which shows that the shear components have heavy tails in that limit. The asymptotic pdf of the shear magnitude in the limit of an infinite number of stars is also presented. All the results on the random microlensing shear are given for a general point in the lens plane. Extending to the general random distributions (not necessarily uniform) of the lenses, we employ the Kac-Rice formula and Morse theory to deduce general formulas for the expected total number of images and the expected number of saddle images. We further generalize these results by considering random sources defined on a countable compact covering of the light source plane. This is done to introduce the notion of global expected number of positive parity images due to a general lensing map. Applying the result to microlensing, we calculate the asymptotic global expected number of minimum images in the limit of an infinite number of stars, where the stars are uniformly distributed. This global expectation is bounded, while the global expected number of images and the global expected number of saddle images diverge as the order of the number of stars. © 2009 American Institute of Physics.
Type
Journal article
Permalink
https://hdl.handle.net/10161/3370
Published Version (Please cite this version)
10.1063/1.3267859
Publication Info
Petters, AO; Rider, B; & Teguia, AM (2009). A mathematical theory of stochastic microlensing. II. Random images, shear, and the Kac-Rice formula. Journal of Mathematical Physics, 50(12). pp. 122501. 10.1063/1.3267859. Retrieved from https://hdl.handle.net/10161/3370.
This is constructed from limited available data and may be imprecise. To cite this article, please review & use the official citation provided by the journal.
Collections
More Info
Show full item record Benjamin Powell Distinguished Professor of Mathematics
<!-- Current Research Interests --> Mathematical Physics Mathematics - tools form differential geometry, singularities, and probability theory Physics - problems connected to the interplay of gravity and light (gravitational lensing, general relativity, astrophysics, cosmology) My current research in mathematical physics is on gravitational lensing, which is the study of how gravity acts on light. In particular, I utiliz
This author no longer has a Scholars@Duke profile, so the information shown here reflects their Duke status at the time this item was deposited.