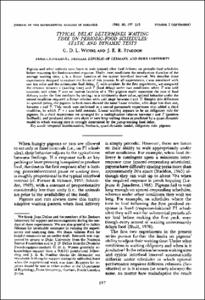 View / Download
2.0 Mb
Date
Authors
Wynne, CD
Staddon, JE
Repository Usage Stats
290
views
288
downloads
Abstract
Pigeons and other animals soon learn to wait (pause) after food delivery on periodic-food schedules before resuming the food-rewarded response. Under most conditions the steady-state duration of the average waiting time, t, is a linear function of the typical interfood interval. We describe three experiments designed to explore the limits of this process. In all experiments, t was associated with one key color and the subsequent food delay, T, with another. In the first experiment, we compared the relation between t (waiting time) and T (food delay) under two conditions: when T was held constant, and when T was an inverse function of t. The pigeons could maximize the rate of food delivery under the first condition by setting t to a consistently short value; optimal behavior under the second condition required a linear relation with unit slope between t and T. Despite this difference in optimal policy, the pigeons in both cases showed the same linear relation, with slope less than one, between t and T. This result was confirmed in a second parametric experiment that added a third condition, in which T + t was held constant. Linear waiting appears to be an obligatory rule for pigeons. In a third experiment we arranged for a multiplicative relation between t and T (positive feedback), and produced either very short or very long waiting times as predicted by a quasi-dynamic model in which waiting time is strongly determined by the just-preceding food delay.
Type
Journal article
Permalink
https://hdl.handle.net/10161/3387
Collections
More Info
Show full item record James B. Duke Distinguished Professor Emeritus of Psychology and Neuroscience
Until my retirement in 2007, my laboratory did experimental research on learning and adaptive behavior, mostly with animals: pigeons, rats, fish, parakeets.  We were particularly interested in timing and memory, feeding regulation, habituation and the ways in which pigeons and rats adapt to reward schedules. The aim  is to arrive at simple models for learning that can help to identify the underlying neural mechanisms. I continue to do theoretical and historical work on the power law in