Toward a North Carolina Commission of Inquiry on Torture 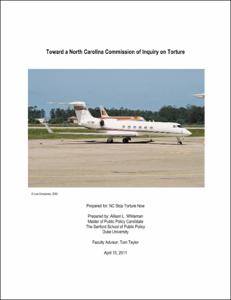 View / Download
724.0 Kb
Date
Author
Whiteman, Allison L.
Advisor
Taylor, Tom
Repository Usage Stats
453
views
763
downloads
Abstract
Since the attacks of September 11, 2001, the US has been fighting a global “War on Terror.” The military action is not a “war” in the traditional sense; its general objective is to eradicate the Al Qaeda terrorist network and secure Afghanistan and Iraq. One way the US has handled national security concerns brought on by the global War on Terror is through extraordinary rendition. Extraordinary rendition is “the practice of sending a foreign criminal or terrorist suspect covertly to be interrogated in a country with less rigorous regulations for the humane treatment of prisoners.” The CIA contracts with a number of civilian corporations to transport detainees. Aero Contractors, a Delaware corporation with its principal office in Smithfield, North Carolina, has provided logistical support for the CIA. Aero Contractors is an aviation company that operated two planes—tail numbers N313P and N379P—that a number of authors allege carried detainees to CIA detention facilities abroad, including Guantánamo Bay, Cuba, and Kabul, Afghanistan. Many flights began and ended in either Smithfield or Kinston, NC. A number of detainees, including Binyam Mohamed, Bisher Al-Rawi, Abou El-Kassim Britel, and Khaled El-Masri, have claimed they were flown by Aero Contractors and subsequently tortured. NC Stop Torture Now is a grassroots coalition of individuals interested in investigating the role of North Carolina businesses in the War on Terror. State and national efforts to provide accountability for torture have been ineffective, and detainees have been unsuccessful in bringing lawsuits against Aero Contractors and other defendants. NC Stop Torture Now wants to create a Commission of Inquiry to investigate concerns that Aero Contractors violated international prohibitions against torture and extraordinary rendition. This Masters Project evaluates models for a Commission of Inquiry.
Type
Master's project
Department
The Sanford School of Public Policy
Subject
North Carolina
Commission of Inquiry
Torture
Extraordinary Rendition
Permalink
https://hdl.handle.net/10161/3398
Citation
Whiteman, Allison L. (2011). Toward a North Carolina Commission of Inquiry on Torture. Master's project, Duke University. Retrieved from https://hdl.handle.net/10161/3398.
Collections
More Info
Show full item record