Taming the Dragon: The Modernization of the Chinese Equity Markets and its Effects on IPO Underpricing 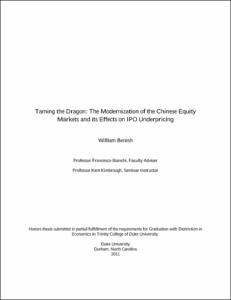 View / Download
588.9 Kb
Date
Author
Benesh, William Jr
Repository Usage Stats
277
views
198
downloads
Abstract
The extreme underpricing of Chinese Initial Public Offerings in the early days of the Chinese equity markets was reduced by several reforms instituted by the Chinese government from around 2000 to 2002. These reforms reduced 1-day returns on IPOs from 295% to 72%. The reforms reduced IPO underpricing by decreasing the inequality between IPO supply and demand. These reforms, while announced between 2000 and 2002, likely took until around 2004 to take full effect. In addition to inequality between supply and demand, other factors such as information asymmetry and government/quality signaling contributed to underpricing both before and after the reforms.
Type
Honors thesis
Department
Economics
Subject
Initial Public Offerings
Underpricing
China
Regulation
Stock Markets
Permalink
https://hdl.handle.net/10161/3550
Citation
Benesh, William Jr (2011). Taming the Dragon: The Modernization of the Chinese Equity Markets and its Effects on IPO Underpricing. Honors thesis, Duke University. Retrieved from https://hdl.handle.net/10161/3550.
Collections
More Info
Show full item record