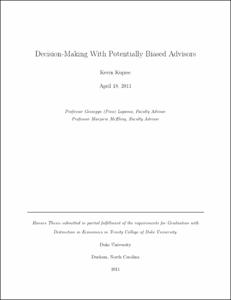 View / Download
6.0 Mb
Date
Author
Kupiec, Kevin
Repository Usage Stats
291
views
207
downloads
Abstract
With the world full of situations in which information that is potentially useful to decision-making is dispersed among various individuals, research into how this information can be efficiently shared has been the focus of a large body of research in recent years. Intuitively, it seems that even the most self-interested agents would benefit from sharing at least some of their private information, and by considering the sender-receiver game, the simplest Bayesian game with communication, it is possible to examine this belief. Previous research has studied the sender-receiver game in detail in order to characterize the associated equilibrium and determine properties of optimal decision-making strategies. However, a key assumption among current literature is that both players know the preference divergence between the sender and receiver, but this is not always true. In order to close the gap in research that currently exists, this paper examines the sender-receiver game when the preference divergence is unknown to the receiver, but in a situation when commitment to a mechanism is possible. The results reveal that any optimal mechanism maximizing the expected utility of the receiver must take a rather simple form in which he chooses the sender's favorite action in general, but if the recommendation is above or below a certain threshold, the decision rule becomes independent of the information. The results have many real-world implications and suggest that when commitment is possible, even when the receiver doesn't know how great the preference divergence is, expected utilities, a priori, can be increased. The analysis also suggests that disclosure of preferences by the sender may actually decrease expected outcomes.
Description
Economics Honors Thesis
Type
Honors thesis
Department
Economics
Subject
Bayesian Games
Mechanism Design
Communication
Conflict of Interests
Sender-Receiver
Permalink
https://hdl.handle.net/10161/3554
Citation
Kupiec, Kevin (2011). Decision-Making With Potentially Biased Advisors. Honors thesis, Duke University. Retrieved from https://hdl.handle.net/10161/3554.
Collections
More Info
Show full item record