Personalizing Ideology in the News: The Impact of News Aggregators and Collective Filtering 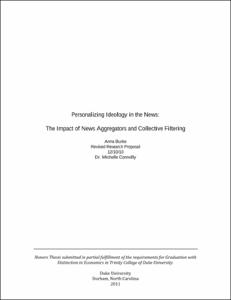 Files
Burke, ThesisPaper.docx
209.4 Kb
Burke, ThesisPaper.pdf
175.4 Kb
Date
Author
Burke, Anna
Repository Usage Stats
368
views
397
downloads
Abstract
This paper finds state-specific 2- and 3-word phrases that reflect the Republican and Democratic language most commonly used by Congress people from that state by performing content analysis regressions on the 2009-2010 Congressional Record. The relative percent of Republican “buzz word” search for each metro area within a state is then compared to the percent of the population from that metro who voted Republican in the 2008 Presidential Election. I find a significant correlation between the percentage of Republican voters in a metro and the relative percentage of Republican search terms in that same area.
Type
Honors thesis
Department
Economics
Subject
technological change; research and development; diffusion processes; intellectual property rights; government policy
Permalink
https://hdl.handle.net/10161/3557
Citation
Burke, Anna (2011). Personalizing Ideology in the News: The Impact of News Aggregators and Collective Filtering. Honors thesis, Duke University. Retrieved from https://hdl.handle.net/10161/3557.
Collections
More Info
Show full item record