The Perception and Depiction of Females: Sarcasm Replacing Humor from 1960-1975 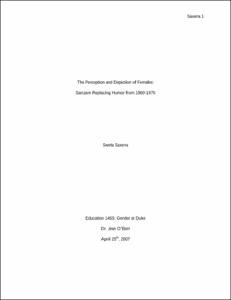 View / Download
821.1 Kb
Date
Author
Saxena, Sweta
Repository Usage Stats
464
views
995
downloads
Abstract
As female activism demanded equality in the social, economic and political contexts in the twentieth century in America, their effects could be seen in higher education at Duke University in the 1960’s with the ending of the Woman’s College due to its merge into Trinity in 1972. These national and campus changes influenced the depiction and were influenced by the depiction of women in opinion-based articles and cartoons in “The Chronicle” from 1960 to 1975 and “The Peer” from 1960 to 1969. My analysis of two time periods, from 1960 to 1969 and 1969 to1975, shows that the depictions of women in humor related material were based on a perception that females chose to change because of influential national and university events. I hypothesized that from 1960 to 1969, when women were just beginning to realize that feminism could give them what they deserved such as the sexual revolution being able to provide them equality in sexual activity, female students were sexually objectified academically and socially in humorous material by mostly male authors because the sexual revolution did not take effect until about a decade later. Therefore the males’ perception was driving the depiction of females. However from 1969 to 1975, during the time of the national Women’s Liberation beginning in 1969, and Title IX and the university’s merger into Trinity in 1972, the opinionated authors changed to a voice of seriousness and commented sarcastically on the effects of feminism that were occurring on campus as well as in America. With the effect of the Women’s Liberation movement, Title IX and the merger, the increased number in females writing for “The Chronicle” tried to change the depiction of women in order to change the perception of females.
Description
Paper submitted for EDUC146S Spring 2007
Type
Course paper
Department
Education
Subject
Duke University
Feminism
Woman’s College
The Chronicle
The Peer
Permalink
https://hdl.handle.net/10161/356
Citation
Saxena, Sweta (2007). The Perception and Depiction of Females: Sarcasm Replacing Humor from 1960-1975. Course paper, Duke University. Retrieved from https://hdl.handle.net/10161/356.
Collections
More Info
Show full item record