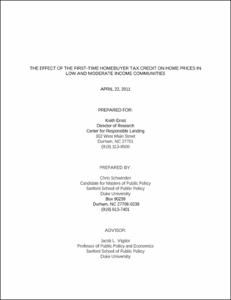 View / Download
1.5 Mb
Date
Author
Schwinden, Chris
Advisor
Vigdor, Jacob
Repository Usage Stats
460
views
677
downloads
Abstract
The Center for Responsible Lending (CRL) is a Durham-based organization that works to promote homeownership and economic opportunity for low and moderate income communities and communities of color, which traditionally have been underserved by financial markets. Because of the steep decline in housing prices across the country, but especially in low and moderate income communities, CRL is interested in examining policies that can support housing prices in order to protect homeowner equity. The First-Time Homebuyer Tax Credit was a program that made a maximum $8,000 fully refundable tax credit available to first time homebuyers from February 2009 to May 2010. During that time, the Credit was expanded to include repeat homebuyers, as well. The Credit program was used extensively throughout 2009 and 2010, with over three million Credit claims made. Because the Credit was focused primarily on first-time homebuyers, who generally have smaller incomes and buy lower priced homes, this analysis examines the effect that the program had on lower tier of the housing market. The Credit’s effect on prices is a function of the relative elasticities of supply and demand for housing. In short, if supply is constrained, we would expect to see a larger effect of the Credit on prices, compared to when supply is more relaxed. Also, we would expect to see a larger effect of the Credit on lower priced homes; since the Credit was capped at $8,000, this amount would represent a larger share of the purchase price of lower priced homes compared to higher priced ones. When we see a house bought/sold during the Credit, in markets with relatively inelastic supply, we would expect the incidence of the Credit to go to sellers, as they would command a higher price. In markets with relatively more elastic supply, we would not expect prices to rise as much, and as a result, home buyers would gain relatively more from the Credit. ii Specifically, this paper examines the effect that the Credit had on houses prices in 16 major metropolitan areas before, during, and after the Credit. Through descriptive analysis, we see that these 16 metropolitan areas saw very different price movements before, during and after the Credit. In some markets, notably those that saw very high growth in the run-up to the housing crisis (e.g. California, and the Southwest), saw a steep decline in prices leading up to the Credit, and big jump during the Credit, and continued steep decline after the Credit. Other markets saw much more tempered price movements throughout. Also, some cities saw very different price movements based on the price tier. For example, the low price tier in Minneapolis saw a significant increase during the Credit period, but a much smaller increase in the middle and high tiers of the market. Overall, prices moved very differently depending on the city and market segment. I then turn models that control for other factors that may be influencing house prices, such as employment, income, population, and supply side constraints like housing permits and starts. Although the results vary base on the specific model used, this analysis concludes that the Credit did indeed have a significant effect on prices. Generally, the strongest effect of the Credit can be seen in the lower priced segments of the housing market, as the Credit represented a larger share of the purchase price of these types of houses. However, mid- and higher priced markets also generally saw an increase in price associated with the Credit. However, the effect of the Credit was short-lived. When the Credit expired in May 2010, house prices continued their decline. In short, it appears as though the Credit stimulated short term demand for housing, and may have increased the supply of housing, as well. One notable finding is that the increase in prices appears to be fairly significant, and perhaps, much more than we would expect from simple economic theory. This may indicate that iii homebuyers were motivated to get the Credit just for its own sake, even though in some cases, they may have been better off waiting for the market to cool, and for prices to fall even further.
Type
Master's project
Department
The Sanford School of Public Policy
Subject
housing policy
tax credit
Permalink
https://hdl.handle.net/10161/3577
Citation
Schwinden, Chris (2011). THE EFFECT OF THE FIRST-TIME HOMEBUYER TAX CREDIT ON HOME PRICES IN LOW AND MODERATE INCOME COMMUNITIES. Master's project, Duke University. Retrieved from https://hdl.handle.net/10161/3577.
Collections
More Info
Show full item record