Including the Excluded: Recommendations for Improving the Enrollment of Disabled Children in Primary School in the United Republic of Tanzania 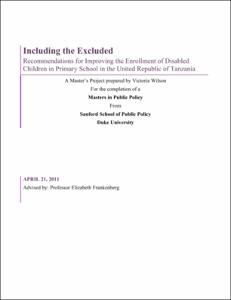 View / Download
420.0 Kb
Date
Author
Wilson, Victoria
Advisor
Frankenberg, Elizabeth
Repository Usage Stats
1,320
views
918
downloads
Abstract
Policy Question What social, economic and environmental factors hinder the enrollment of disabled, primary school-aged children in the United Republic of Tanzania, and how can the government turn the country’s existing educational system into an inclusive one that overcomes these barriers? Background The definition of disability has changed over the past few decades so that the root of the cause is not an individual’s impairment but the social, environmental and attitudinal barriers established by society. This new definition of disability, called the social model, explains the cycle of impairment and poverty seen around the world, including the United States. Once an individual becomes impaired, he becomes socially excluded from society. If he is young, he is often excluded from a country’s education system because it lacks the ability to accommodate him or because he is actively discriminated against due to the stigma of disability. Lack of education leads to limited employment choices, or no employment choices, which in turn leads to poverty. Poverty leads to living in unsanitary, crowded conditions that can either lead to an exasperation of an existing impairment or an increased chance of disability amongst those living with the impaired person. The vicious cycle then starts all over again. Although statistics about disability worldwide are unreliable, it is estimated that 10 percent of the world’s population is disabled; 200 million of them are children. In the United Republic of Tanzania, 7.8 percent of the population is disabled in 2008. Only 4 out of 10 disabled children were enrolled in primary school 2008, and according to the country’s 2008 National Disability Survey, 16 percent were refused entry to schools. Thus, these children are fated to continue living in poverty and potentially transmitting poverty and disability on to their children. The international community, along with the Government of Tanzania, have not ignored the fact disabled children face severe barriers to school enrollment. Several conventions, most importantly the UN Convention on the Rights of Persons with Disabilities, have stated that disabled children have the right to education and that countries have the duty to ensure their educational systems include them. This new model of education is called inclusive education, which is simply, “a process of addressing and responding to the diversity of needs of learners through increasing participation in learning, cultures and communities, and reducing exclusion within and from education”. Tanzania has signed the UN Convention, established legislation that reflects this change towards inclusive education and created a basic policy framework. However, after nearly a decade, Tanzanian disabled, primary school-aged children are still being excluded. The goal of this project is to determine what barriers contribute to low rates of school enrollment amongst the disabled in Tanzania in the hopes of discovering how to best change the educational system so that it is more inclusive. Data and Methodology The data for this project comes from Tanzania’s 2002 Census, which was the country’s first census to include a module on disability. Four probit regression models were created, two that predict the probability of childhood disability and two that predict the probability of primary school enrollment. Each of the four models has a set of variables referring to individual, dwelling and household head characteristics; however, two of the models had variables referring specifically to mothers in order to analyze the extent mothers have influence on both of the dependent variables. The goal of these regressions is to assess the social, economic and environmental conditions in which disabled children lived at the time Tanzania began developing its policies. After analyzing the results of the regressions, it was discovered that the social model is correct; disabled children in Tanzania do appear to be trapped in a cycle of poverty that both excludes from economic advancement and social integration. In no way does the analysis definitively establish the cause of educational exclusion or determine exactly what mechanism drives the poverty cycle. Case Studies Knowing the barriers to educational inclusion in Tanzania is important, but it is equally important to try to figure out how the country can overcome them. Technically, there is no universally agreed upon definition of what qualifies as an inclusive education system. However, after reviewing documents from UNESCO and the UN Special Rapporteur on Rights to Education, a twenty-two point criteria was created to evaluate different countries’ approaches to inclusive education. Three countries, South Africa, India, the United States, were determined to be models for certain aspects of the created inclusive education criteria that Tanzania can learn a great deal from. Recommendations The following recommendations were created based on the above case studies, Tanzania’s existing education programs and initiatives and the social barriers identified in this paper: 1. Commission a study to assess the causes behind the low school enrollment of children with disabilities. 2. Develop a concrete, nationally recognized definition of inclusive education 3. Integrate inclusive education priorities into existing educational programs in order to form one cohesive inclusive education strategy 4. Give District Councils more control and flexibility to implement inclusive education strategies 5. Introduce greater accountability into all levels of the educational system
Type
Master's project
Department
The Sanford School of Public Policy
Subject
Tanzania, inclusive education, disabilities, primary school
Permalink
https://hdl.handle.net/10161/3582
Citation
Wilson, Victoria (2011). Including the Excluded: Recommendations for Improving the Enrollment of Disabled Children in Primary School in the United Republic of Tanzania. Master's project, Duke University. Retrieved from https://hdl.handle.net/10161/3582.
Collections
More Info
Show full item record