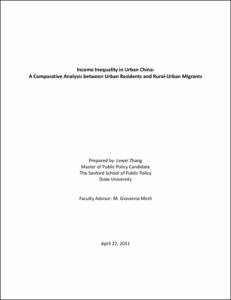 View / Download
710.4 Kb
Date
Author
Zhang, Lewei
Advisor
Merli, M Giovanna
Repository Usage Stats
2,271
views
4,053
downloads
Abstract
EXECUTIVE SUMMARY Since the economic reform in the late 1970s, China’s economy has experienced consistently rapid growth, with a drastic change of production pattern and income distribution. The increasing income inequality, which is of importance to social justice and economic potential, has raised concerns in China. Because of rapid urbanization, millions of Chinese are flowing into cities from rural areas, so the income inequality within urban areas has received more research attention in recent years. Given the unique household registration system (Hukou) in China, the urban population can be divided into urban residents who are born in cities with urban Hukou and rural-urban migrants who are originally from rural areas with rural Hukou. The two subgroups have quite different characteristics and do not enjoy the same level of social benefits. Previous studies have not given enough focus on the migrant subgroup in terms of income inequality. To better understand income inequality issues in urban China, this study performs a comparative analysis between the two subgroups of urban residents and rural-urban migrants, seeking to answer the following questions: What are the income inequality levels between subgroups of urban residents and rural-urban migrants, and within each subgroup? How do related factors affect income inequality within each subgroup? How does each income source affect overall individual income inequality for both subgroups? How does each asset source affect overall household asset inequality for both subgroups? How should policy makers adjust relevant policies to reduce income inequality levels in urban China? RECOMMENDATION I recommend that the government should take the following courses of action: Remove the bonds between the Hukou system and educational opportunities, enabling all children to have equal rights of access to education at all levels of schooling. Narrow the levels of economic development among eastern, central, and western regions while striving to develop economy continuously in all parts of the country. Decouple the association between the Hukou system and the provision of social benefits in urban China. Increase the provision of public housing to low-income families in the cities. METHODOLOGY This study uses the data of the China Household Income Project (CHIP) collected in 2002 to analyze income inequality in urban China. I employ three types of inequality decomposition methods, subgroup decomposition, factor decomposition, and source decomposition, to compare the two population subgroups of urban residents and rural-urban migrants. The first step is examining the income inequality indices, the Gini coefficient and the Theil index, within both subgroups and further calculating the Theil index between the subgroups. Apart from dividing the urban population by Hukou status, this study additionally divides the sample by several variables of interest such as region, employer ownership, party membership, and employment status to decompose the inequality between and within groups. The second step is using the regression-based decomposition method developed by Fields to analyze how each relevant factor contributes to the inequality within subgroups of urban residents and rural-urban migrants. The covariates included in the regression model are gender, education, work experience, party membership, contract type, employer ownership, occupation, industry, and region. To further analyze the migrant subgroup, this study applies a similar method by dividing this subgroup into migrant employees and self-employed migrants, since the characteristics of the two types are different in many ways. The third step is conducting inequality decomposition by source to compare the two subgroups in terms of individual income and household assets. This study calculates the contribution of each income source such as wages income, business income, transfer income, and property income to the overall income inequality. Similarly, this study examines the effect of asset sources including financial assets, housing assets, fixed productive assets, and durable goods on the overall household assets inequality as well. Conclusion The income inequality level within the migrant subgroup is higher than that within the group of urban residents, although the income level of the former is lower than that of the latter. The results of the subgroup decomposition show that the effect of inequality within subgroups outweighs the effect of inequality between subgroups. Moreover, the distribution of income is more equal for those who work in the public sector and for those who are not self-employed. The results of factor decomposition show that among all the factors that have influence on income inequality, education and region are the two prominent covariates that contribute the most to the inequality for both subgroups of urban residents and rural-urban migrants. Therefore, promoting educational equality and decoupling the links between the Hukou system and educational opportunity is critical to reduce inequality levels in urban China. Given the relationship between development level and inequality level, China should strive to narrow the development gaps among regions to increase the level of income equality, and continue to promote economic development in all parts of the country in the mean time. Among income sources, transfer income has the effect of reducing individual income inequality for urban residents. To lower income inequality in urban China, rural-urban migrants should enjoy the social benefits transfer equally as do urban residents, so the bonds between the Hukou system and entitlement programs should gradually be removed. In addition, as part of the property income, house-rent income can increase income inequality in urban areas. The government should take measures to provide public housing to low-income households, to avoid the enlargement of both income and asset inequality in the cities.
Type
Master's project
Department
The Sanford School of Public Policy
Subject
Income Inequality
Urban Residents
Rural-urban Migrants
Decomposition
China
Permalink
https://hdl.handle.net/10161/3584
Citation
Zhang, Lewei (2011). Income Inequality in Urban China: A Comparative Analysis between Urban Residents and Rural-Urban Migrants. Master's project, Duke University. Retrieved from https://hdl.handle.net/10161/3584.
Collections
More Info
Show full item record