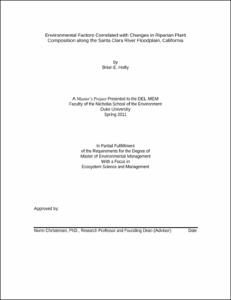 View / Download
4.5 Mb
Date
Author
Holly, Brian
Advisor
Christensen, Norm
Repository Usage Stats
468
views
429
downloads
Abstract
Riparian habitat supports a diverse array of species and is maintained by complex environmental processes. Changes in habitat composition can be an indicator of the health of an ecosystem, which is based on the assumption that an ecosystem, with a diverse suite of plant communities, can support a diverse set of animal species because of the complexity of microhabitats created by the layering of trees, shrubs, and herbaceous and aquatic vegetation (Nautilus Environmental 2005). The aim of this study was to provide an analysis of habitat conditions and vegetation dynamics in relation to environmental factors and invasive species establishment to discern what changes, if any, occur to a nine-acre southern willow scrub riparian community as a result of the cessation 2.5 million GPD of wastewater. The study began in January of 2009 and ended in February of 2011. Cessation of treated effluent water occurred in May, 2010. A total of 119 plant species of 82 genera was observed. Absolute percent cover values for each species were collected at 19 plots over 16 events. Willow (Salix spp.), giant reed (Arundo donax) and mulefat (B. salicifolia) were the most abundant and dominant species. Change in mean absolute percent cover values for dominant species was analyzed for overall and seasonal trends. Overall willow percent cover values declined sharply during the post cessation study while overall variation with other plants occurred more or less sporadically. Species richness declined and variation in percent cover and nativity occurred at several plots. Ordination techniques as non-metric multidimensional scaling (NMS) and canonical correspondence analysis (CCA) were used to examine the relationship between changes in vegetation and environmental parameters. CCA analysis revealed that axis 1 is strongly correlated with willow percent cover while axis 2 is strongly correlated with Arundo percent cover. These gradients were closely related to the first 2 canonical axes and accounted for approximately 30% of the species-environment relationship in the study plots. The results suggest that variation in species composition is related to percent cover change in willow and Arundo. Other environmental variables that were correlated included distance of the study site to the center of effluent channel and the presence or absence of surface water. Understanding relationships between environmental variables and vegetation dynamics is helpful in applying these findings to management and conservation of southern California riparian ecosystems.
Type
Master's project
Department
Nicholas School of the Environment and Earth Sciences
Subject
Riparian ecosystem analysis, community ecology, ecosystem science and management, natural resource management, canonical correspondence analysis
Permalink
https://hdl.handle.net/10161/3590
Citation
Holly, Brian (2011). Environmental Factors Correlated with Changes in Riparian Plant Composition along the Santa Clara River Floodplain, California. Master's project, Duke University. Retrieved from https://hdl.handle.net/10161/3590.
Collections
More Info
Show full item record