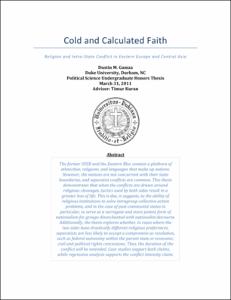 View / Download
966.8 Kb
Date
Author
Gamza, Dustin
Repository Usage Stats
430
views
447
downloads
Abstract
The former USSR and the Eastern Bloc contain a plethora of ethnicities, religions, and languages that make up nations. However, the nations are not concurrent with their state boundaries, and separatist conflicts are common. This thesis demonstrates that when the conflicts are drawn around religious cleavages, tactics used by both sides result in a greater loss of life. This is due, it suggests, to the ability of religious institutions to solve intragroup collective action problems, and in the case of post-communist states in particular, to serve as a surrogate and more potent form of nationalism for groups disenchanted with nationalist discourse. Additionally, the thesis explores whether, in cases where the two sides have drastically different religious preferences, separatists are less likely to accept a compromise as resolution, such as federal autonomy within the parent state or economic, civil and political rights concessions. Thus, the duration of the conflict will be extended. Case studies support both claims, while regression analysis supports the conflict intensity claim.
Description
Finalist for the 2011 Robert F. Durden Prize
Type
Honors thesis
Department
Political Science
Subject
Religion
Soviet Union
Yugoslavia
Separatist Conflict
Civil War
Nationalism
Permalink
https://hdl.handle.net/10161/3596
Citation
Gamza, Dustin (2011). Cold and Calculated Faith. Honors thesis, Duke University. Retrieved from https://hdl.handle.net/10161/3596.
Collections
More Info
Show full item record