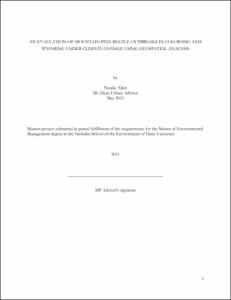 View / Download
4.2 Mb
Date
Author
Allen, Natalie
Advisor
Urban, Dean
Repository Usage Stats
362
views
1,376
downloads
Abstract
In the past two decades, the native mountain pine beetle (Dendroctonus ponderosae) has decimated the pine forests of Colorado and Wyoming. These infestations are an issue for local communities because of the loss of ecosystem services that these forests provide, the potential for increased fire risk in the dead stands, and the unattractive appearance of these dead trees, which result in lower property values and is an eyesore for the local population. Previous research has linked climate change to increased outbreak levels and the range expansion of this beetle. In my study, a geospatial analysis was used to identify susceptible forests under current and future climate conditions based on the mountain pine beetle’s temperature tolerance and host vegetation requirements. A climate envelope model was used, and thus the results determine the potential for mountain pine beetle attack but do not evaluate the results of future attacks. Historically, cold winter temperatures limited the range and magnitude of outbreaks; however, under the IPCC’s A1B climate scenario, nearly all of the pine forests in the study area will be susceptible by 2050. Under this scenario, some 400,000 additional acres of forest will become susceptible to outbreaks by 2050, an increase of about 8.5%. The new areas that will become at risk include the San Isabel National Forest, Gunnison National Forest, Grand Mesa National Forest, and Uncompahgre National Forest. Forested areas just to the west of Colorado Springs that were once protected by cold winter temperatures will become increasingly susceptible to outbreaks. Under future conditions, climate change adaptation mechanisms such as forest restoration will be increasingly important. Because of a lack of resources for large-scale management operations, small-scale suppression strategies, such as the use of pheromones, insecticides, and thinning, will be particularly important at the wildlands-urban interface and other sites of local importance. The lessons from this beetle can be used to direct future forest and climate change policies, and highlight the need to increase resources for adaptation in order to protect natural areas, improve landscape-level management, reduce other stresses to the environment, and enhance the natural resilience of forest ecosystems.
Type
Master's project
Department
Nicholas School of the Environment and Earth Sciences
Subject
Climate change
Mountain Pine Beetle
Forest Pests
Insect Outbreaks
Permalink
https://hdl.handle.net/10161/3599
Citation
Allen, Natalie (2011). AN EVALUATION OF MOUNTAIN PINE BEETLE OUTBREAKS IN COLORADO AND WYOMING UNDER CLIMATE CHANGE USING GEOSPATIAL ANALYSIS. Master's project, Duke University. Retrieved from https://hdl.handle.net/10161/3599.
Collections
More Info
Show full item record