Cooperation Over Water in the Eastern Nile Basin: Obstacles & Opportunities 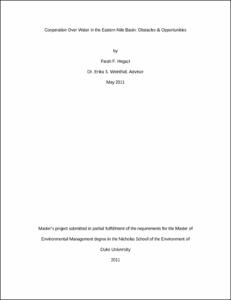 View / Download
208.0 Kb
Date
Author
Hegazi, Farah
Advisor
Weinthal, Erika
Repository Usage Stats
369
views
1,518
downloads
Abstract
The Nile River is shared by ten states: Kenya, Rwanda, Tanzania, Uganda, Burundi, the Democratic Republic of Congo, Ethiopia, Eritrea, Sudan, and Egypt. Tension between upstream and downstream states in the Nile Basin has long been a part of the history of their relationship with much of the tension being between Egypt, Sudan, and Ethiopia. In order to encourage cooperation over water resources, Dennis Wichelns and his colleagues proposed an economic framework for cooperation. The framework proposes that Egypt, Sudan, and Ethiopia form an intra-regional trading system that depends on each of their comparative advantages. Egypt would grow high-value export crops, Sudan would grow grain, and Ethiopia would develop its hydropower resources. The proposed system ostensibly seems to be the perfect solution to the tension and hostility that exists between the three countries, however, it disregards the legal obstacles to implementation, in addition to Egypt’s status as the Basin’s hegemon. This project aims to determine if Wichelns et al.’s (2003) framework is feasible given the 1959 Agreement, signed between Egypt and Sudan, the 2010 Cooperative Framework Agreement between Ethiopia, Burundi, Uganda, Rwanda, Tanzania, and Kenya, and Egypt’s status as the Basin’s hegemon. In order to answer these questions, I resorted to three sources of information: 1) existing literature, 2) interviews with experts in the field of water management, and 3) newspaper articles. Based on the information I collected, and my analysis, I was able to determine that the 1959 Agreement presents an obstacle to implementing the framework because neither Egypt nor Sudan are willing to re-negotiate their water allocations. However, the Cooperative Framework Agreement does not present an obstacle; rather it is an opportunity for Egypt and Sudan to exert their influence over development in the Nile Basin. Additionally, being the Basin’s hegemon would not hinder the framework for various reasons, including the role of virtual water, and Ethiopia’s counter-hegemonic strategies. Based on my findings, I conclude that Wichelns et al.’s (2003) framework is not feasible, primarily due to the 1959 Agreement. In light of this, I present three recommendations to promote cooperation between Egypt, Sudan, and Ethiopia. First, Egypt and Sudan should sign the Cooperative Framework Agreement; second, Egypt should improve its irrigation efficiency to reduce its water use; and third, cooperation should take a project-by-project approach. The paper ends with reflections on the role of a newly independent South Sudan in Nile Basin negotiations, in addition to the implication of a new government in Egypt.
Type
Master's project
Department
Nicholas School of the Environment and Earth Sciences
Subject
Nile River; 1959 Agreement; CFA; Military action; South Sudan.
Permalink
https://hdl.handle.net/10161/3602
Citation
Hegazi, Farah (2011). Cooperation Over Water in the Eastern Nile Basin: Obstacles & Opportunities. Master's project, Duke University. Retrieved from https://hdl.handle.net/10161/3602.
Collections
More Info
Show full item record