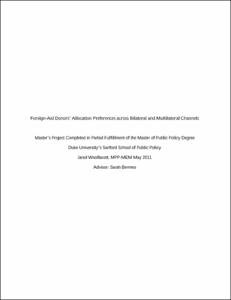 View / Download
712.7 Kb
Date
Author
Woollacott, Jared
Advisor
Bermeo, Sarah
Repository Usage Stats
451
views
560
downloads
Abstract
This paper examines how developed countries allocate foreign aid to less developed countries. In giving aid, countries act on a variety of motives that have received much attention in academic literature. I focus on three motives: geopolitical, commercial, and humanitarian. Once being motivated to give aid, a donor must decide how it will do so. Broadly, the donor can use bilateral or multilateral channels – it can act alone or with its peers. Each method comes with particular costs and benefits for donors, and one channel might better serve certain motives than another might. The primary task of this work is to identify for which criteria major donors exhibit strong channel preferences.1 Donors exhibit a strong multilateral bias in allocating on democracy (humanitarian) and capital openness (commercial). These criteria share certain characteristics that make them likely candidates for multilateral channels. First, both objectives are widely shared by major western donors. Second, they both confer broad benefits that are difficult for donors to particularize to certain interest groups. Third, they are critical aspects of a country’s political and economic control, requiring large-scale coordinated efforts if donors hope to induce changes in recipient governments. By expressing these preferences through multilateral channels, donors capitalize on these collective action benefits multilaterals confer. Donors (aside from the United States) also exhibit a strong multilateral bias in supplementing US military support. Here, in pursuing their geopolitical interests, donors capitalize on the legitimacy benefits offered by multilateral agencies. By contrast, donors express strong bilateral biases with respect to former colonies and property rights. Colonial history is a nearly exclusive relationship among donors and recipients, the benefits of which donors are not inclined to share with other donors. Nor should we expect donors to be able to solicit other donors to support them in reaping these exclusive gains. Though property rights confer broad-based benefits, they do not enjoy as uniformly expressed preferences as do capital openness and democracy. Property rights also pose much less threat to the autonomy of recipient governments than does democracy or capital openness, making the need for coordinated action less acute. The differences in how donors use multilateral agencies for allocating aid helps to shed light on why they use them. Multilateral agencies offer donors legitimacy in their geopolitical behavior and provide valuable collective action mechanisms for pursuing common goals that have broad benefits and face strong opposition. These results highlight legitimacy and collective action as two primary benefits of multilateral aid agencies and help explain why donors employ both bilateral and multilateral channels in the manner and to the extent they do in giving aid.
Type
Master's project
Department
The Sanford School of Public Policy
Permalink
https://hdl.handle.net/10161/3619
Citation
Woollacott, Jared (2011). Foreign-Aid Donors’ Allocation Preferences across Bilateral and Multilateral Channels. Master's project, Duke University. Retrieved from https://hdl.handle.net/10161/3619.
Collections
More Info
Show full item record