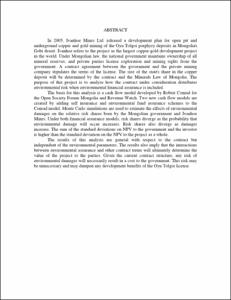 View / Download
215.7 Kb
Date
Author
Mancinelli, Lauri
Repository Usage Stats
1,226
views
1,457
downloads
Abstract
In 2005, Ivanhoe Mines Ltd. released a development plan for open pit and underground copper and gold mining of the Oyu Tolgoi porphyry deposits in Mongolia’s Gobi desert. Ivanhoe refers to the project as the largest copper-gold development project in the world. Under Mongolian law, the national government maintains ownership of all mineral reserves, and private parties license exploration and mining rights from the government. A contract agreement between the government and the private mining company stipulates the terms of the license. The size of the state’s share in the copper deposit will be determined by the contract and the Minerals Law of Mongolia. The purpose of this project is to analyze how the contract under consideration distributes environmental risk when environmental financial assurance is included. The basis for this analysis is a cash flow model developed by Robert Conrad for the Open Society Forum Mongolia and Revenue Watch. Two new cash flow models are created by adding self insurance and environmental fund assurance schemes to the Conrad model. Monte Carlo simulations are used to estimate the effects of environmental damages on the relative risk shares born by the Mongolian government and Ivanhoe Mines. Under both financial assurance models, risk shares diverge as the probability that environmental damage will occur increases. Risk shares also diverge as damages increase. The sum of the standard deviations on NPV to the government and the investor is higher than the standard deviation on the NPV to the project as a whole. The results of this analysis are general with respect to the contract but independent of the environmental parameters. The results also imply that the interactions between environmental assurance and other contract terms will ultimately determine the value of the project to the parties. Given the current contract structure, any risk of environmental damages will necessarily result in a cost to the government. This risk may be unnecessary and may dampen any development benefits of the Oyu Tolgoi license.
Type
Master's project
Department
Nicholas School of the Environment and Earth Sciences
Subject
Mining
Gobi desert
Mongolia
Risk management
Environmental Risk
Permalink
https://hdl.handle.net/10161/363
Citation
Mancinelli, Lauri (2007). Environmental Risk Sharing in the Oyu Tolgoi Mining Project. Master's project, Duke University. Retrieved from https://hdl.handle.net/10161/363.
Collections
More Info
Show full item record