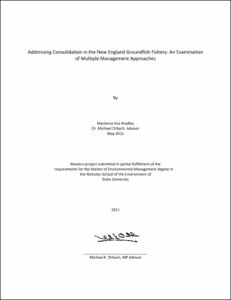 View / Download
1.5 Mb
Date
Repository Usage Stats
310
views
931
downloads
Abstract
Consolidation of the New England groundfish fleet has been commonly cited as a potential consequence of the newly implemented catch share management system. However, the New England Fisheries Management Council has yet to implement policies to protect the interests of small-scale fishermen or to maintain geographic and fleet diversity. Smaller fishing operations are less competitive than larger fishing corporations and are typically the first to go when fisheries switch to catch share management. Inaction by the Council stems from disagreements amongst members as to the extent of consolidation resulting in the disenfranchisement of small-scale fishing interests, largely due to a lack of data of the subject. This masters project investigates the nature and avenues for consolidation over the major management shifts in this fishery, characterizing how the fleet has changed over time. A combination of resources were used to conduct this assessment including primary and secondary sources of literature, informal interviews with key informants in the field, and data requested from the National Marine Fisheries Service. Additionally, policy mechanisms used elsewhere to protect fleet diversity are explored, including accumulation limits and community quota entity programs. These mechanisms are then incorporated into several management approaches such as the existing sector program and Individual Transferable Quotas (ITQs) which are compared to determine which would most effectively protect the continued participation of small-scale fishing interests, resulting in fleet diversity and a more disperse geographical distribution of participants. The results from this analysis show that the groundfish fleet in New England has consolidated considerably over the major management shifts both as a result of direct government attempts to reduce fleet size through vessel and permit buyouts and because of unintended consequences of regulations, marginalizing small-scale fishermen. This study finds that the Council should continue with the current catch share management approach via fishing sectors, but incorporate community quota entity programs in order to assist existing community efforts.
Type
Master's project
Department
Nicholas School of the Environment and Earth Sciences
Permalink
https://hdl.handle.net/10161/3636
Citation
(2011). Addressing Consolidation in the New England Groundfish Fishery: An Examination of Multiple Management Approaches. Master's project, Duke University. Retrieved from https://hdl.handle.net/10161/3636.
Collections
More Info
Show full item record