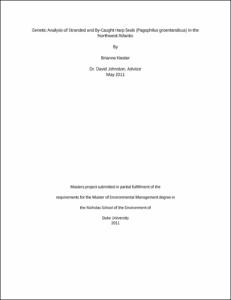 View / Download
200.9 Kb
Date
Author
Kiester, Brianne
Advisor
Johnston, David
Repository Usage Stats
407
views
320
downloads
Abstract
We are currently witnessing significant climate changes in high latitude ecosystems including many areas of the Arctic. Many high latitude species, like harp seals (Pagophilus groenlandicus), will be affected and their populations forced to adapt to changing habitats. The overall fitness and genetic diversity of the population will affect how quickly a population can adapt. This study used microsatellite markers to determine and compare heterozygosity and fitness between stranded and by-caught harp seals along the east coast of the United States. Our study found there is no significant difference in fitness (d²) between these two groups and that the overall fitness of the population is high. We found that for most markers, stranded seals had a higher mean d² and that only one marker showed significant differences between the two groups. Both groups had equal heterozygosities, supporting the idea that the seals come from the same population. These results demonstrate that the increasing strandings and entanglements are due to other factors than fitness or genetic diversity. Climate change is playing a large in role in the survival and adaptation of these species. When compared to ice cover data, there is a correlation between years with light ice cover and high strandings. Future studies should investigate this correlation to see if climate is the driving force behind increases in sightings of harp seals within the United States. Harp seals are a useful indicator species for the changing Arctic climate system and it will be important for managers to understand what they can do to conserve the species and resources of the Arctic ecosystem.
Type
Master's project
Department
Nicholas School of the Environment and Earth Sciences
Subject
harp seals, microsatellites, fitness, stranded seals, climate change
Permalink
https://hdl.handle.net/10161/3641
Citation
Kiester, Brianne (2011). Genetic Analysis of Stranded and By-Caught Harp Seals (Pagophilus groenlandicus) in the Northwest Atlantic. Master's project, Duke University. Retrieved from https://hdl.handle.net/10161/3641.
Collections
More Info
Show full item record