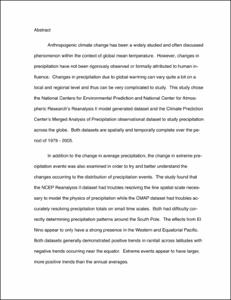 View / Download
266.9 Kb
Date
Author
Aparna, Bamzai
Advisor
Hegerl, Gabriele
Repository Usage Stats
349
views
342
downloads
Abstract
Anthropogenic climate change has been a widely studied and often discussed phenomenon within the context of global mean temperature. However, changes in precipitation have not been rigorously observed or formally attributed to human influence. Changes in precipitation due to global warming can vary quite a bit on a local and regional level and thus can be very complicated to study. This study chose the National Centers for Environmental Prediction and National Center for Atmospheric Research’s Reanalysis II model generated dataset and the Climate Prediction Center’s Merged Analysis of Precipitation observational dataset to study precipitation across the globe. Both datasets are spatially and temporally complete over the period of 1979 - 2005. In addition to the change in average precipitation, the change in extreme precipitation events was also examined in order to try and better understand the changes occurring to the distribution of precipitation events. The study found that the NCEP Reanalysis II dataset had troubles resolving the fine spatial scale necessary to model the physics of precipitation while the CMAP dataset had troubles accurately resolving precipitation totals on small time scales. Both had difficulty correctly determining precipitation patterns around the South Pole. The effects from El Nino appear to only have a strong presence in the Western and Equatorial Pacific. Both datasets generally demonstrated positive trends in rainfall across latitudes with negative trends occurring near the equator. Extreme events appear to have larger, more positive trends than the annual averages.
Type
Master's project
Department
Nicholas School of the Environment and Earth Sciences
Subject
Climate change
National Centers for Environmental Prediction and National Center for Atmospheric Research
Climate Prediction
Permalink
https://hdl.handle.net/10161/366
Citation
Aparna, Bamzai (2007). Global Changes in Precipitation Extremes. Master's project, Duke University. Retrieved from https://hdl.handle.net/10161/366.
Collections
More Info
Show full item record