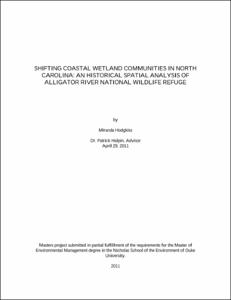 View / Download
6.4 Mb
Date
Author
Hodgkiss, Miranda
Advisor
Halpin, Patrick
Repository Usage Stats
339
views
346
downloads
Abstract
Coastal wetlands are dynamic landscapes shaped by many factors. However, there is growing concern that sea level rise brought on by climate change, and its associated physical pressures (e.g. saltwater intrusion, increased flooding, accelerated erosion, and increased storm frequency and severity), will amount to significant habitat change and loss for these systems. The Nature Conservancy (TNC) has initiated their Climate Change Adaptation Project in an effort to study and help mitigate for the effects of climate change on the Alligator River National Wildlife Refuge, situated in North Carolina’s Albemarle-Pamlico estuarine system. As a component of their project, TNC would like to identify areas of the refuge that have undergone significant changes in habitat type so they can better focus their adaptation strategies. Through the examination and classification of historical aerial photography, this study informs TNC of the overall changes in habitat that have occurred on the refuge. An overlay analysis on data from 1932 to 2009 was completed using GIS to calculate the total change and rates of change of the vegetative communities on the refuge, and to identify areas of the refuge that have been changing more rapidly. This study also takes a closer look at some fine-scale changes that occurred at two study sites near the shoreline of the refuge, to determine if rising sea levels play a significant role in the dynamics of these coastal wetlands. Results from CART (Classification and Regression Tree) models indicate that sea level rise might indeed be one of the forces driving habitat change on the refuge.
Type
Master's project
Department
Nicholas School of the Environment and Earth Sciences
Subject
Wetlands
sea level rise
geospatial analysis
vegetation classification
habitat change
coast
Permalink
https://hdl.handle.net/10161/3663
Citation
Hodgkiss, Miranda (2011). Shifting Coastal Wetland Communities in North Carolina: An Historical Spatial Analysis of Alligator River National Wildlife Refuge. Master's project, Duke University. Retrieved from https://hdl.handle.net/10161/3663.
Collections
More Info
Show full item record